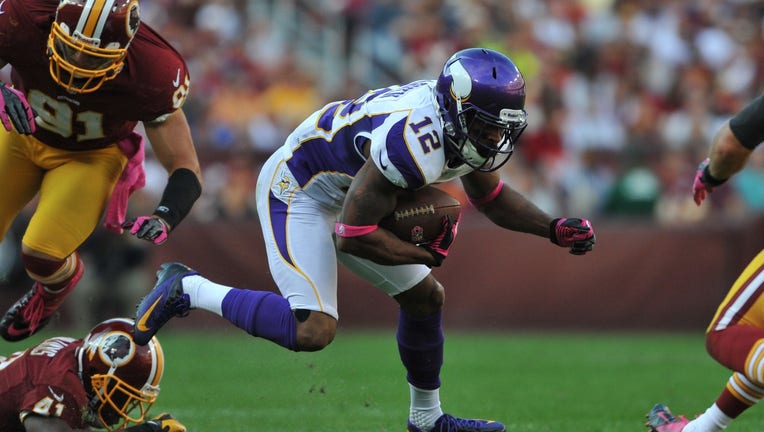 Percy Harvin #12 of the Minnesota Vikings runs against the Washington Redskins Minnesota Vikings at FedExField on October 14, 2012 in Landover, Maryland. The Redskins defeated the Vikings 38-26. ((Photo by Larry French/Getty Images))

MINNEAPOLIS - Percy Harvin wants to get back into football, and his announcement on social media Wednesday morning created quite a buzz.

Harvin, quarantined like all of us during the Coronavirus pandemic, told ESPN’s Josina Anderson, “I’m ready to return to the NFL. I thought I was done, but that itch came back. I’ve been training with a former Olympian. My body is good, mentally I’m better. My family is good. The timing is right.”

Anderson released videos of Harvin working out at a private facility, running, lifting and doing agility drills. He never filed retirement papers, and could play in the NFL again if a team is willing to take a chance on him.

Harvin, now 31 and weighing in at 185 pounds, was drafted by the Minnesota Vikings at No. 22 overall in 2009. Harvin spent four seasons with the Vikings before being traded for three draft picks, including a first round pick, to the Seattle Seahawks in 2013.

In 54 games with the Vikings, Harvin caught 280 passes for more than 3,300 yards and 20 touchdowns. He was also a special teams threat in kick returns. His best season came in 2011, where had 967 yards receiving and six touchdowns.

Harvin played his final two seasons with the Buffalo Bills, and hasn’t played since 2016.

His agent has already reached out to several NFL teams. The Vikings have a need at wide receiver after trading Stefon Diggs to the Bills for four draft picks.