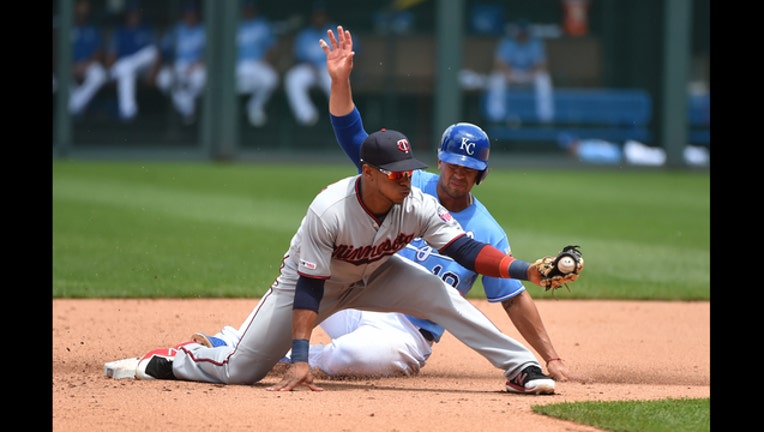 Jorge Polanco #11 of the Minnesota Twins steps on the bag as the gets the force out on Cheslor Cuthbert #19 of the Kansas City Royals in the fifth inning at Kauffman Stadium on June 22, 2019 in Kansas City. (Photo by Ed Zurga/Getty Images)

MINNEAPOLIS (FOX 9) - The Minnesota Twins are 77 games into the 2019 season, and they’ve got the best winning percentage in the American League.

The Twins, at 50-27 (.649) are second in Major League Baseball in win percentage only to the L.A. Dodgers, who are 54-25 (.684). Yet there is mild concern among Twins fans after the Cleveland Indians swept the Detroit Tigers over the weekend.

The Twins are back in Minneapolis and had an off day on Monday after splitting a four-game series in Kansas City over the weekend. Minnesota is 5-5 in its last 10 games, and host the Tamp Bay Rays for a three-game series at Target Field starting Tuesday night.

The reality is this: It’s no time to panic if you’re a Twins fan. It’s baseball, losing happens. Over a 162-game schedule, you’re going to have skids. It may not be a double-digit lead, but the Twins will likely have a comfortable lead in the division heading into the All-Star Game. Their remaining series before the Mid-Summer Classic are home against the Rays, at the White Sox, at Oakland and home against the Texas Rangers.

Most important for the Twins might be this: They have a three-game series against the Indians at Progressive Field coming out of the All-Star break. It might be the Twins’ best chance for an early knockout punch in the division race.

The major concern for the Twins is getting healthy, and that could happen as soon as Tuesday’s series opener against Tampa Bay. Byron Buxton (wrist), Ehire Adrianza (abdominal injury), Mitch Garver (heel) and Marwin Gonzalez (hamstring) all missed the Kansas City series with injuries. All four could be back as early as Tuesday.

Jonathan Schoop has also missed time with a sore foot, and Jose Berrios was taken out of his last start in the eighth inning with a blister on his throwing hand.

The Twins have come back to Earth, slightly, at the plate. They lost two of three to the Boston Red Sox last week and were out-scored 14-8 in the series. They also managed single runs in both the series opener and finale at Kansas City.

The good news is that Minnesota’s run differential (+105) is still tops in the American League. The Twins also lead MLB, hitting .271 as a team, and lead all of baseball with 147 homers. They also lead the big leagues with a .502 slugging percentage.

Four Twins’ regulars in the starting lineup are now vying for starting spots for the American League in the All-Star Game. They are C.J. Cron, Joe Mauer’s replacement at first base, designated hitter Nelson Cruz, shortstop Jorge Polanco and outfielder Eddie Rosario.

The Twins haven’t lit it up offensively lately, but still have seven players with at least 11 homers. Another three players -- Buxton, Gonzalez and Miguel Sano – have nine. Rosario leads Minnesota with 20 home runs, and Max Kepler is next at 19.

The standards have been raised for the Twins, and that’s a good thing. Berrios has been an ace, and reports are the blister on his throwing hand shouldn’t be a long-term issue. Jake Odorizzi already has 10 wins, and Kyle Gibson and Martin Perez have combined for 14 wins. And with the July 31 non-waiver trade deadline approaching, look for the Twins to add either a reliever or starter, or even both.

Polanco leads the AL in hitting at .324, and the Twins have six regular starters hitting at least .269.

Every team hits a skid at some point. The Houston Astros, one of the top teams in the AL, had lost seven straight and are currently 3-7 in their last 10 games.

It will take a lot for the Twins to lose an eight-game lead in the division, so kick your feet up and enjoy the season.