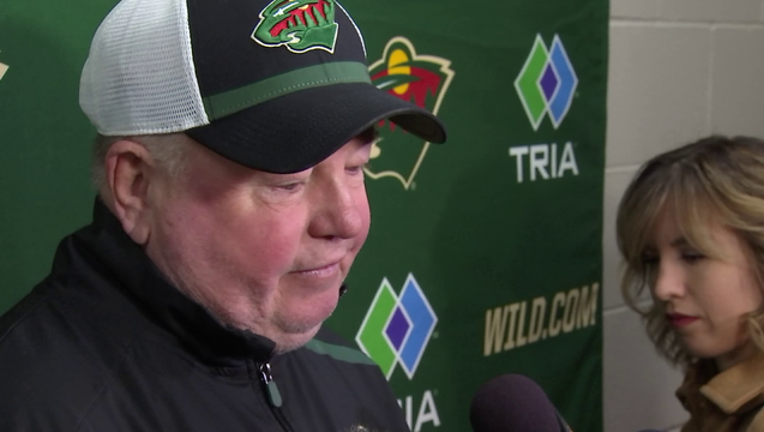 ST PAUL (FOX 9) - Minnesota Wild Matt Dumba took the ice Wednesday for the first time since last December, when he had surgery to repair a torn pectoral muscle suffered during a fight with the Calgary Flames.

Dumba on the ice was a sight for sore eyes, even if his coach didn’t get the memo.

“I didn’t even know he skated until five minutes ago, so I assume it was. Nothing has changed with his timeline, he was just bored,” Wild coach Bruce Boudreau said at Wednesday’s practice.

Dumba’s status has not changed, and there isn’t a timetable for when might return or if it would even happen this season.

One player Boudreau expects back is center Luke Kunin, who missed the Wild’s last two losses with an upper body injury. But the Wild will now be without Joel Eriksson Ek, who suffered a lower body injury in Monday’s 3-0 loss to the San Jose Sharks. Boudreau said he hopes to have Eriksson Ek back within a week.

The Wild got a critical day of practice in before hosting the Dallas Stars Thursday night. They spent most of it working on the power play, which is struggling through a seven-game scoreless streak. The Wild haven’t scored a power-play goal in their last 18 man advantages, including going 0-for-3 in Monday night’s loss.

The Wild hasn’t scored a power-play goal since Feb. 26 at Winnipeg.

“We’re getting a lot of chances, we’re just not scoring. What we’re not doing is getting second chances. So retrievals are vital in this game, and winning the first faceoff is vital, and it’s something we’ve been lacking lately,” Boudreau said.

The Wild also hasn’t played well for most of this season in front of its home crowd. They’re just 14-14-6 at Xcel Energy Center, and it’s a big reason why they’re fighting for the last spot in the Western Conference playoffs with only 12 regular season games left.

If the regular season were to end today, Wild players would be packing their lockers and planning vacations. They’re currently ninth with 74 points, one point back of the No. 8 spot. The Wild is 0-5-4 in nine home games since its bye week.

After Thursday’s game against Dallas, the home stand continues against the New York Rangers, New York Islanders and Colorado. That’s four games in a six-day stretch.

It’ll be a battle to the very last game for the Wild just to get to the playoffs. But if they can, anything can happen.