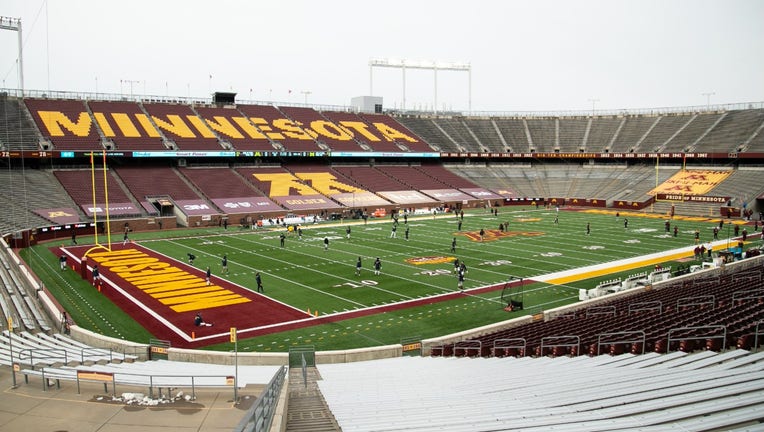 A general view of TCF Bank Stadium before the game between the Michigan Wolverines and Minnesota Golden Gophers on October 24, 2020 in Minneapolis, Minnesota. ((Photo by David Berding/Getty Images))

MINNEAPOLIS - The University of Minnesota football team is without two starting offensive linemen and a handful of other potential starters as it opens the 2020 season against Michigan Saturday night at TCF Bank Stadium.

Offensive linemen Daniel Fa’alele and Curtis Dunlap Jr. did not come out of the tunnel for pregame warm-ups. Fa’alele was injured during the Gophers’ loss to Wisconsin at the end of last season and did not play in the Outback Bowl. He participated in spring practice before the NCAA shut down activities due to the COVID-19 pandemic. It’s not known if his absence is related.

Dunlap started 12 of 13 games last season and put his name in the NCAA transfer portal earlier this summer before returning to the Gophers. Dunlap is at the game, so his absence is not COVID-19 related. He is one the sideline, and is sporting a cast on his left leg.

Linebacker Braelin Oliver, who suffered a knee injury during spring practice, is also not dressed and won’t play, but is at the game.

Per Big Ten protocols, any player that tests positive for COVID-19 is out for a minimum of 21 days.