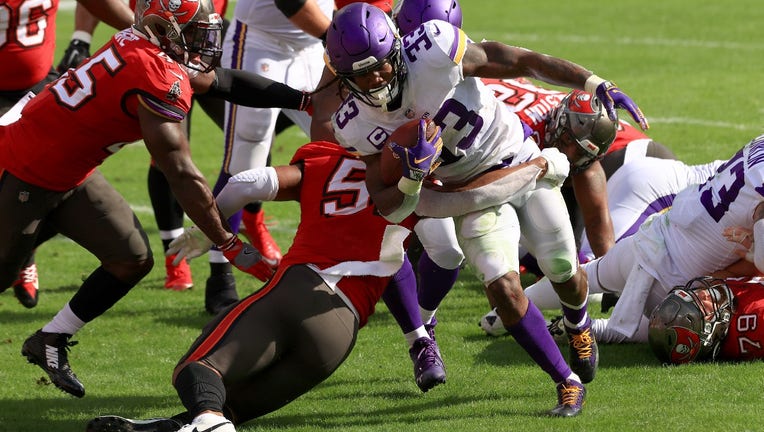 Dalvin Cook #33 of the Minnesota Vikings runs in for a touchdown against the Tampa Bay Buccaneers at Raymond James Stadium on December 13, 2020 in Tampa, Florida. ((Photo by Mike Ehrmann/Getty Images))

MINNEAPOLIS - The Minnesota Vikings finish the regular season at the Detroit Lions on Sunday, and as they have been most of the season, they’ll be without several key players.

Among the Vikings’ inactives released 90 minutes before kickoff include running back Dalvin Cook and linebacker Eric Kendricks. Cook is missing his second game of the season, and is back in Florida after the unexpected death of his father earlier this week. Cook will finish second in the NFL in rushing with 1,557 yards and 15 rushing touchdowns. He was also named to the Pro Bowl for the second straight season.

The Vikings will also be without offensive lineman Riley Reiff, who was placed on the reserve/COVID-19 list earlier this week.

We’ll find out at kickoff who among the healthy and available starters will play. Rookie Justin Jefferson, the team’s other Pro Bowl selection, is 47 yards away from Randy Moss’s record for receiving yards as a rookie. Jefferson leads NFL rookies and is eighth in the league with 1,267 yards, and he didn’t start until Week 3. Jefferson has 79 catches and seven touchdowns on the season.

The Vikings can finish no better than 7-9, are eliminated from the NFC Playoff picture and are unlikely to risk key starters playing for fear of an injury affecting the offseason.