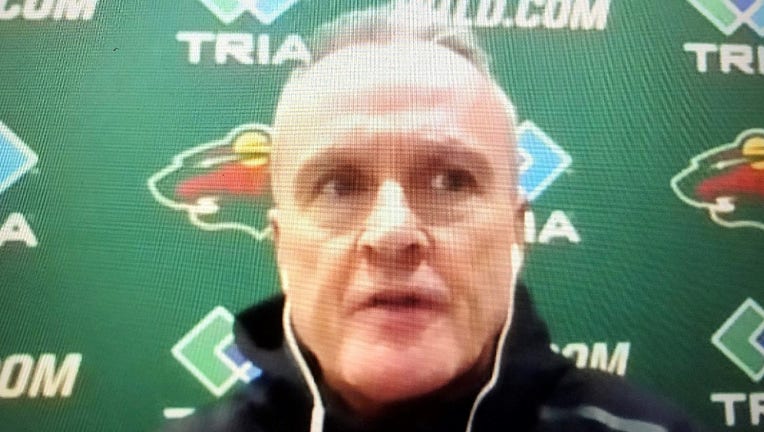 Minnesota Wild coach Dean Evason talked with reporters on Monday ahead of the team's season-opener on Thursday at the L.A. Kings.

MINNEAPOLIS - The Minnesota Wild has completed a full week of training camp, and after scrimmages Friday and Sunday night, the countdown to the 2021 regular season is on.

The Wild will open its season Jan. 14 on the West Coast at the L.A. Kings. They have another match-up with the Kings Saturday night before heading to Anaheim for two games next week. They come back home to face the San Jose Sharks Jan. 22, but it will be an entirely different atmosphere at Xcel Energy Center without fans.

So are they ready for a 56-game season in the West Division?

"We think so. We’ve had plenty of opportunity through practice and two of the intrasquad games to see game-like situations. Of course it’s always different playing against an opponent, but we just feel that the group that we have here, the people that we’ve brought in, are veteran people. When the puck is dropped, hockey is hockey," Wild coach Dean Evason said Monday. "Hopefully we’ve done what we’re supposed to do as far as our attention to detail and allowing them to go out and play freely."

The Wild will have six taxi squad minor league players working out with them during the season, and those decisions aren’t made lightly. Evason said the evaluations were done throughout training camp.

"We don’t want an individual sitting and practicing the entire season and not playing a hockey game. Hockey players need to play hockey, not just practice hockey. How that shakes out, I’m not sure. We’re all not sure. We want everyone to play hockey," Evason said.

Minnesota’s practice on Monday featured four lines, with eight defensemen and their top two goalies, Cam Talbot and Kaapo Kahkohnen. The Wild is without Alex Stalock, who is out indefinitely with an upper body injury.

It’s a mix of everything for the Wild this season. They’ve got veterans in Zach Parise, Ryan Suter and newly-named captain Jared Spurgeon. They’ve got young stars, highlighted by Russian prospect Kirill Kaprizov, who has already turned heads a week into training camp.

How quickly they can put it all together when the games are for real starting Thursday night is the big question. They’ve gotten younger and added skill, and in a season shortened by COVID-19, they have to have urgency from the moment the puck drops.

The top priority is staying healthy and safe as they try to complete a modified season amid a global health pandemic. So far, the Wild has been able to do that, but that’s not the case across the NHL. The Columbus Blue Jackets have had COVID-19 cases, and the Dallas Stars had to push back their opener due to COVID-19 issues.

"Our guys have been real good, but we can’t let our guard down. We just have to continue to do the right things and hopefully stay safe so that we can play hockey," Evason said.