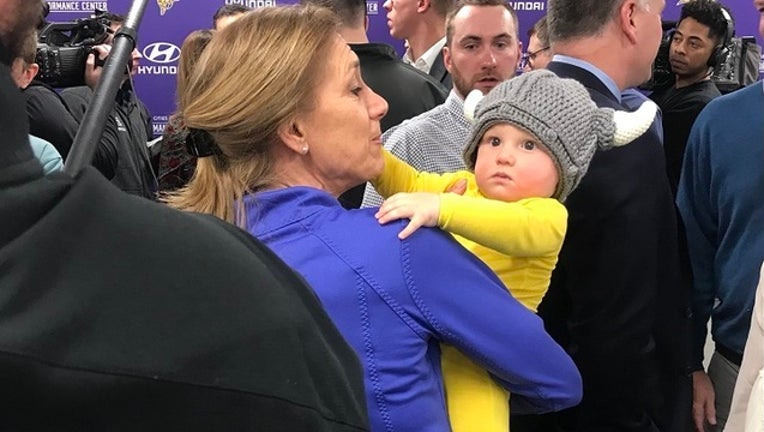 MINNEAPOLIS (KMSP) - Cooper Cousins is quickly adjusting to life in Minnesota. The 5-month-old son of new Vikings quarterback Kirk Cousins is already proudly wearing his Vikings horns and mastering the Skol Chant. Friday morning, Cousins posted a video of Cooper and his wife Julie doing a baby version of the chant that thunders through U.S. Bank Stadium on Vikings game days.

With apologies to 98-years-young Sid Hartman and Fox 9’s own Hobie Artigue, Paul Blume, Dawn Mitchell and Pierre Noujaim, Cooper was without a doubt the cutest one in attendance at Cousins’ introductory press conference Thursday, donning a knit beanie with Viking horns.

Cousins signed a three-year, fully-guaranteed deal reportedly worth $84 million, making him the NFL’s highest paid-player. Although his contract is only three years, Cousins said the goal is to make this a “lifetime deal.”

“Yes, this is a three-year deal, but the expectation is from both sides that we’d raise our kids here and if everything goes as planned, I’ll be here for a long, long time,” Cousins said.

Finding the right place to raise Cooper and grow his family was a critical part of the free agency process for Cousins. The 29-year-old quarterback was in Minnesota earlier this year for the Super Bowl. He says he rented a car and drove around because he wanted to get a feel for the area. He told his wife everything was “checking the boxes.”

Cousins told reporters he had a “grocery list” of reasons for choosing Minnesota, but the main reason was winning.