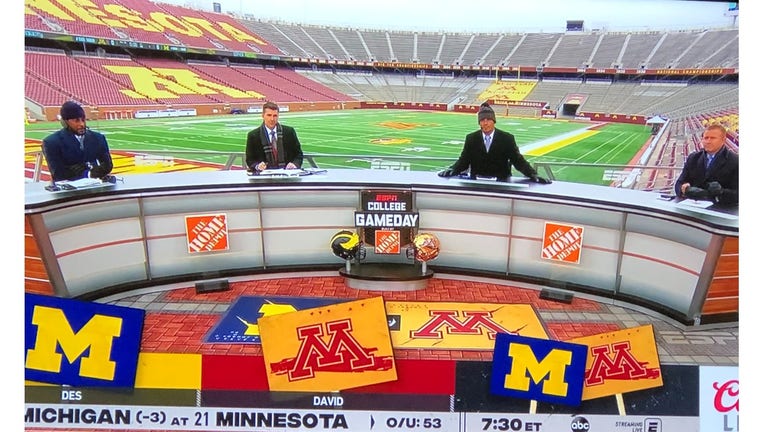 The College GameDay panel was split, with Desmond Howard and Lee Corso taking Michigan to beat Minnesota, while David Pollack and Vince Vaughn picked the Gophers.

MINNEAPOLIS - The University of Minnesota football team opens its 2020 season under the lights against Michigan Saturday night at TCF Bank Stadium, and ESPN’s College GameDay is in Minneapolis for the Gophers’ second straight home game.

The No. 21-ranked Gophers and No. 18-ranked Wolverines kickoff at 6:30 p.m., and it’ll be the first time a ranked Minnesota program has hosted a ranked opponent since 1968.

As is customary at the end of each show, the GameDay crew made their picks for who will win Saturday’s games. Howard, who won the Heisman Trophy at Michigan, picked the Wolverines. Pollack and celebrity guest picker Vince Vaugh, who lived briefly in Minneapolis, each picked the Gophers to beat Michigan. Corso, joining the show virtually from his Orlando home, sported a large Michigan helmet to pick the Wolverines.

The Gophers haven’t beaten the Wolverines at home since 1977. Minnesota last beat Michigan in 2014 in Ann Arbor.