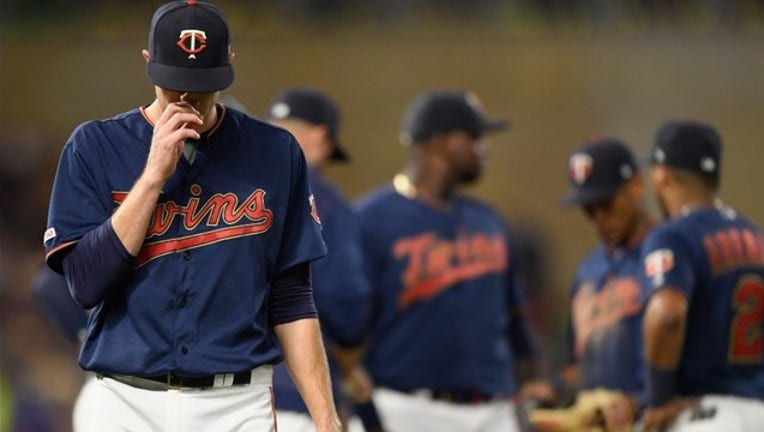 Kyle Gibson #44 of the Minnesota Twins walks to the dugout after being pulled from the game against the Cleveland Indians during the fifth inning on August 8, 2019 at Target Field. (Photo by Hannah Foslien/Getty Images)

MINNEAPOLIS (FOX 9) - The Minnesota Twins have the slimmest of leads in the American League Central Division after a 7-5 loss to the Cleveland Indians Thursday night at Target Field.

The Twins led the division by as many as 11 games at one point in July. They went to Cleveland in the first series out of the All-Star break, won the series and had a 6.5 game lead in the AL Central. That lead is now just one game after Kyle Gibson labored and couldn't get through five innings for the Twins.

The Indians took the lead in the top of the second after Yasiel Puig, acquired from the Cincinnati Reds before the July 31 trade deadline, led off with a triple to right field over Marwin Gonzalez. He scored after a Gibson pick-off throw to first couldn't be handled by Ehire Adrianza.

Cleveland made it a 4-0 lead with three runs in the fourth. Jose Ramirez hit a single to score Oscar Mercado, and Jason Kipnis doubled to left center, scoring Ramirez and Puig.

The Twins cut the deficit in half with two runs in the bottom of the fourth. Luis Arraez lined a two-out single to right, and Jorge Polanco beat Puig's throw home. Gonzales singled to deep right, which scored Miguel Sano.

But it all came after Nelson Cruz, who leads the Twins with 32 home runs, had to leave the game in the fourth after hurting his left wrist swinging and missing at a Clevinger pitch. Cruz spent time on the injured list earlier this season with the same injury.

The Twins announced late in the game Cruz is day-to-day with a strained left wrist.

Gibson struggled with his command after breezing through the first inning in less than 10 pitches. He was pulled in the fifth inning, and on Zack Littel's first pitch in relief, Ramirez lined a two-run double that scored Francisco Lindor and Carlos Santana for a 6-2 Indians lead.

It's the third straight game where a Twins' starting pitcher has struggled. On Wednesday, Martin Perez allowed seven runs, six earned, over sin innings in an 11-7 loss to the Atlanta Braves. On Tuesday, Jose Berrios had his worst outing of the season. He allowed nine earned runs over 5 2/3 innings in a 12-7 loss to the Braves.

The Twins rallied Thursday night with three runs in the bottom of the eighth to get within 6-5. Jorge Polanco doubled to right to score Adrianza. Max Kepler scored on Eddie Rosario's fielder's choice, and Rosario scored on Sano's double to the gap in left center. The Twins had the tying and go-ahead runners on with two out, but Gonzalez popped out to center to end the inning.

The Indians got insurance in the top of the ninth as Tyler Naquin homered to right off Trevor May, giving Cleveland a 7-5 lead.

They needed the insurance. The Twins loaded the bases after Adrianza got a 1-out single to center, Kepler's pop up between deep short and left field found grass and C.J. Cron was intentionally walked. It loaded the bases for Rosario, who's proven plenty of times this season that he lives for the big moment. This time, he flew out to left field on an off-speed pitch with the Target Field crowd chanting "Eddie, Eddie!" to end the game.

Cleveland entered the night having won six of its last eight games. The Indians and Twins have nine more games against each other, and the next six are at Target Field.