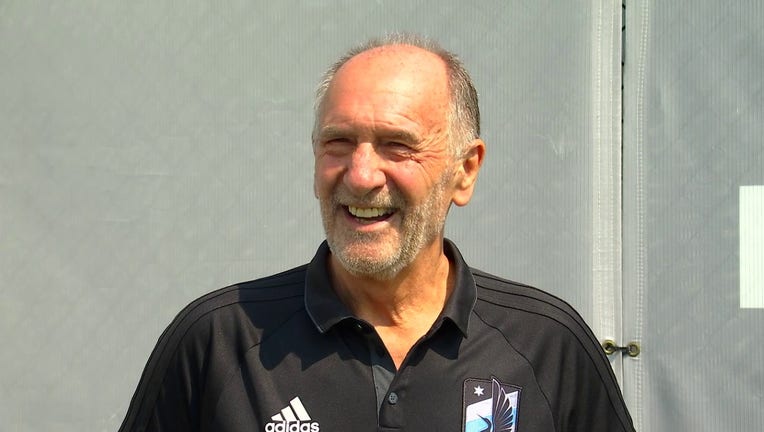 Chris Wright talked Tuesday about stepping down as Minnesota United CEO after the 2021 season.

MINNEAPOLIS - Chris Wright was approached by Minnesota United ownership four years ago with a clear message: Help us open a new stadium, help take our franchise to another level and help make soccer a relevant in the Twin Cities.

It’s safe to say that for Wright, that mission has been accomplished as the Loons’ CEO since 2017. On Monday, Wright announced through team officials that he would be stepping away from the franchise after the 2021 season. He made it very clear to not call it a retirement, though he joked that he only looks 55 and at 72, wants to spend more time with family.

Chris Wright stepping away as Minnesota United CEO, not retiring

Chris Wright is stepping away as Minnesota United CEO, but he is not retiring.

But he wants to get involved in consulting, helping in the transition to a new CEO, public speaking and maybe even getting involved in soccer over in Europe.

"There is only a certain amount of gas left in the tank and this job is 24-7-365. You’re never off the clock. Rather than calling it retirement, it’s just I don’t want to go to work every day. I’m not going to call it retirement, I’m going to say I’m going to step aside and I’m going to look for different projects that will engage me and my family that I can get involved with to make sure this thing just keeps growing the way that it’s been growing over the last four years," Wright told reporters at Loons’ training on Tuesday.

Before coming to Minnesota United, Wright spent 26 years, many of them in a leadership role, with the Minnesota Timberwolves and Lynx. He helped lead the charge to welcome consistent sellout crowds at Allianz Field since it opened in April of 2019, and has expanded the team’s brand across the Twin Cities.

On the field, the Loons have made two straight playoff appearances, got to the Western Conference Finals last year and reached the semifinals of the MLS is Back Tournament, which marked the return of sports from the COVID-19 pandemic.

"Chris has been great for us. He came in at a really important time in the club and he’s put a lot of good things in place that will leave a legacy. It’s been great working with him over the last few years. He can be really proud of what he’s achieved in the time he’s been with us," Loons’ coach Adrian Heath said.

Wright said Tuesday he expects a new CEO to be in place by October. He also said he expects Minnesota United to host the Major League Soccer All-Star Game within the next two years.

So what will he miss the most? The people.

"The people, just an incredible club. We have really built something very special and unique here with Minnesota United. I think the people are just extraordinary. I wish I was 50 again because I wouldn’t be doing what I’m doing right now," Wright said.

Minnesota United was supposed to get a couple days off after last Wednesday’s game at Colorado Rapids, but that all changed after a 2-0 loss that snapped a seven-game unbeaten streak.

Heath, on Tuesday at team training, called the effort "not acceptable."

"That type of performance I thought was two years ago. I thought we left them days behind, but obviously we hadn’t. The players had to be told in no uncertain terms that what we produced in Colorado was not acceptable," Heath said. "You don’t go out with a whimper like we did, I thought the last 10-15 minutes were embarrassing. We’ve addressed that and hopefully we won’t see that again this year."

After 12 matches, the Loons are currently in the last playoff spot in the West at 15 points after an 0-4 start. The next two matches are against Seattle Sounders FC and the Portland Timbers. Heath says we’ll find out then if the message was received.