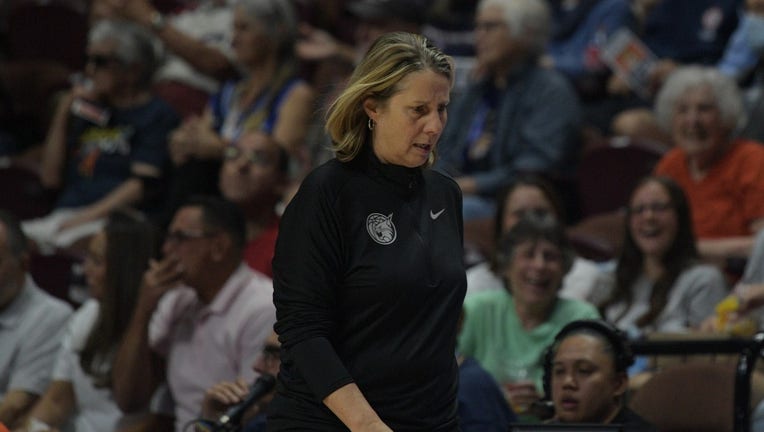 Minnesota Lynx head coach Cheryl Reeve looks on during a WNBA game between the Minnesota Lynx and the Connecticut Sun on August 14, 2022, at Mohegan Sun Arena in Uncasville, CT.  ((Photo by Erica Denhoff/Icon Sportswire via Getty Images))

MINNEAPOLIS - Cheryl Reeve found herself in unfamiliar territory on Monday, speaking with reporters after the end of a 14-22 season.

For the first time since the 2010 season, the Minnesota Lynx are not part of the WNBA Playoffs. A franchise that’s been to the postseason 11 straight times, and won four championships under Reeve, is left to plan for next season without Sylvia Fowles. Reeve was candid and honest Monday, saying she struggled to motivate her roster and there wasn’t "buy-in" among everyone on the team.

After 15 WNBA seasons and eight with the Minnesota Lynx, Sylvia Fowles is retiring after this season and will play her final game at Target Center Friday night.

"I think if everyone is being honest, we didn’t have great buy-in and belief. That’s one of those things that’s so controllable and it’s really disappointing when it happens, but that was our reality," Reeve said.

The Lynx were without Napheesa Collier a majority of the season as she was preparing to have her first child. Multiple players missed time due to injuries, including Fowles, Kayla McBride and Aerial Powers. Reeve brought in veterans Layshia Clarendon and Angel McCoughtry to put depth around Fowles as the plan was to send the 15-year veteran out with a playoff run.

But Clarendon was cut before the regular season, and McCoughtry played just two games.

The Lynx never really gave themselves a chance to be competitive in 2022. They started 0-4 and 3-13. The closest they got to .500 was 10-16, and were eliminated from playoff contention after Sunday’s 90-83 loss to the Connecticut Sun.

Reeve said it came down to a lack of effort on defense, not executing on offense and a team that simply didn’t want to put in the work in practice.

"That’s really never been the path of achieving success. It was hard for me to convince them that what we were doing wasn’t good enough, and wanting more for them. We tried different ways, I tried to really get on them, I tried to yell, cuss and spit. I tried to leave them alone, and I was not able to get through to this group," Reeve said. This team was just resistant to being pushed towards being better. This team, I had to accept less. It goes against everything I stand for and believe in, so that we could survive."

Reeve guaranteed that won’t be the issue in 2023, as she builds a roster around Collier. Effort and buy-in shouldn’t be an issue for a coach that’s won 430 career games, four championships and led a franchise to 11 playoff appearances as a head coach.

"I don’t know how many games we’re going to win, but my experience is that when you have a team that believes in the process and wants to be a part of the process and not just experience an outcome, the wins and losses take care of themselves," Reeve said.

That’s assuming she gets the chance to. Reeve’s contract is up, and talks with ownership about returning are ongoing.

"I never operation under any assumption. I think ownership has been very good to me, ownership believes in me, ownership is in this with me, I think that’s really important," Reeve said. "I’ve made a life here, but it doesn’t necessarily mean it’s going to last a lifetime. I don’t take anything for granted, I think if ownership thinks that I’m still the right person to lead us through this next time, I have to determine whether I’m up for that challenge."

Fowles is stepping away from basketball after 15 WNBA seasons, and the Lynx are now building around Collier moving forward. She said Monday she’s ready to accept that challenge.

"I feel like she’s kind of passed the torch down, I definitely want to do it justice and keep the integrity of the team and what she built here for so long. Who we are as players, our work ethic, things like that," Collier said.

Collier played the last four games of the Lynx season, trying to make one last run with Fowles. She scored six points in three games, and had 11 in a win over the Phoenix Mercury.

She did the best she could to get her body back, but admitted the process was trying.

"For some reason I thought I would just snap back, and that definitely wasn’t the case. I don’t think I understood how long of process it is and what your body really goes through in order to make a human and to get her out," Collier said. "That process of trying to get my body back was harder than I thought."