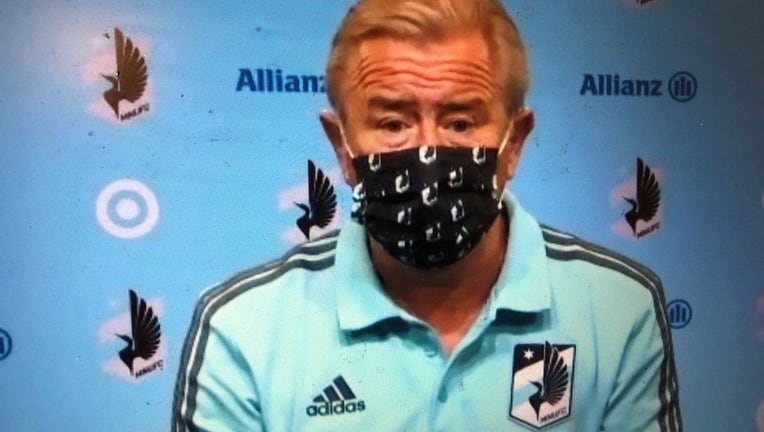 MINNEAPOLIS - A big opportunity awaits Minnesota United as it faces Real Salt Lake late Friday night in the second game of group stage play for both teams at the MLS is Back Tournament in Florida.

The Loons, trailing Sporting Kansas City in stoppage time last Sunday night, got a pair of goals five minutes apart to steal a win and three points, both in the tournament and in the Major League Soccer standings. A win Friday night, and the Loons know they’re advancing to the knockout stage.

Even a draw puts them in good shape to advance with one guaranteed game left. Both teams are 1-0 after Real Salt Lake beat Colorado Rapids 2-0 in its first game.

“We put ourselves in a really good position with the three out of three, can we make it four out of four? If we do, obviously we’ll advance to the next round and it gives us another opportunity,” Loons coach Adrian Heath said Thursday via Zoom. “We know it’s going to be tough tomorrow night.”

Minnesota United got the win over Sporting KC despite possessing the ball for only 37.7 percent of the game. It led to few offensive chances in the first 60 minutes, and tired legs in the Florida heat.

The Loons took advantage of a red card against the Sporting KC keeper, getting two goals late against an opponent down a man and with their No. 2 keeper in net.

“Really happy. That was a massive win for us. It was a great job by the whole team, great effort, fighting to the very last minute and we came away with a win in the final minutes. It was a prize to the effort from the whole team to not give up the fight,” Loons defender Jose Aja said after training earlier this week.

Their next challenge? Waiting all day to play. Friday’s match doesn’t start until 10:30 p.m. Florida team to avoid the heat. While not ideal, both teams have to play in it.

“One of the things that this competition has taught us is there’s not a normal. It’s not normal for players to be getting up at 5:50 and 5:30 and having a full meal at 6 o’clock in the morning to play at 9 o’clock in these conditions. We spoke to the players, we’ll try to keep their routine as regular as possible,” Heath said. “It’s not ideal to play at 10:30 at night, but everybody has got to do it. Some are playing at nine in the morning, so let’s control what we can. This is something that we knew was going to happen, we can’t change that.”

They also played Sunday night without three starts, and lost a fourth early in the second half. Ike Opara is back in Minnesota dealing with a pre-existing condition. Ozzie Alonso was injured in training last week and didn’t play Sunday, and Luis Amarilla got hurt during warm-ups and didn’t play.

Mason Toye went down in the second half grabbing his right hip, and didn’t return. Heath said Alonso and Amarilla returned to training this week, and they’re likely a game-time decision on Friday.

“Every game that we’ve had against them, they’ve been really, really tight. I don’t think the fact that we’re playing our second game after four months, that will change anything,” Heath said. “I expect it to be exactly what we’ve had against them in the past. It’s going to be a very tight affair, it will probably be small incidents and little breaks here and there that will be the difference at the end of the day.”