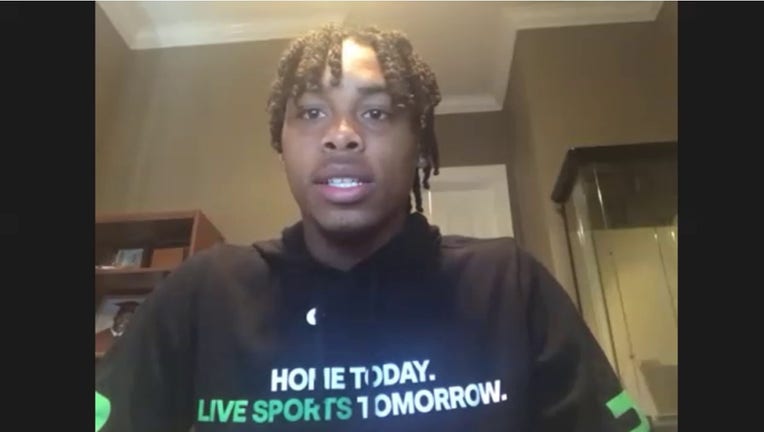 The Minnesota Vikings took LSU receiver Justin Jefferson with the No. 22 pick in the NFL Draft Thursday night.

He woke up Friday morning to the realization that he’s now a professional athlete, and the latest top draft choice for the Minnesota Vikings. During free agency, Vikings General Manager made what he called earlier this week “a good business decision” in dealing Stefon Diggs to the Buffalo Bills for the four draft choices.

That included Thursday night’s No. 22 overall pick, which they used to take one of the top receivers in college football this past season.

“Just a great kid and when you can add great talent that’s also a great person, we feel very fortunate that he was there at 21,” Spielman said late Thursday night.

Jefferson was at a loss for words Thursday night. He was with his family at his Louisiana home and said his heart was racing when his phone rang when the Vikings were on the clock with the No. 22 pick. What followed were tears of joy.

“Just having my heart pounding, receiving the phone call, just realizing that I’m finally becoming a professional athlete and playing for an NFL team. Definitely excited and ready to join the team,” Jefferson said.

He’ll get the opportunity to replace Diggs as the No. 2 receiver behind Adam Thielen. Jefferson’s dream was still a reality Friday morning, when he heard from Vikings’ owners Mark and Zygi Wilf. He also heard from quarterback Kirk Cousins, and Thielen.

Jefferson will come to the Vikings matching speed with the ability to catch from a lot of different spots, running different routes. He was an outside receiver most of his college career, until moving to the slot last season. He made the most of it, tying for the FBS lead with 111 catches. He finished the season with 1,540 yards and 18 touchdowns, and helped lead the Tigers to a national championship.

“Justin is a good player. He was a guy that we really, really liked. I know the offensive staff really liked him. Tough, competitive guy, goes up and gets the football,” Vikings coach Mike Zimmer said Thursday night. Hard worker, lot of contested catches he makes. Really good player, good kid.”

Jefferson got high praise from a former Viking during the NFL Draft coverage Thursday night. Legend Cris Carter called him the best receiver in the draft.

Jefferson met Carter at the NFL Combine and considers him a mentor.

“Hearing him say that about me definitely made me feel good about myself. He’s a hall of famer,” Jefferson said.

Unlike most draft prospects out of LSU, it wasn’t an easy road for Jefferson. He wasn’t highly recruited out of high school. In fact, he took the last scholarship the Tigers had in his class.

He worked his way up the LSU offense and if it wasn’t for teammate Ja’Marr Chase, he would’ve been the Tigers’ top receiver this year. His draft stock rose dramatically after running a 4.43 40-yard dash at the NFL Combine.

Jefferson spent part of the draft process watching film on Cousins, Thielen and Diggs. He’ll get to meet Cousins and Thielen, hopefully sooner than later, and join them in purple Viking jerseys as teammates. He’s from Louisiana, has never been to Minnesota and doesn’t care for the cold, but it’s a small price to pay be in the NFL.

Hearing from his new teammates, and team ownership, helps.

“It’s encouraging and building my confidence for the season with them being supportive. Everybody that got in touch with me made me feel welcome. People welcomed me with open arms,” Jefferson said.