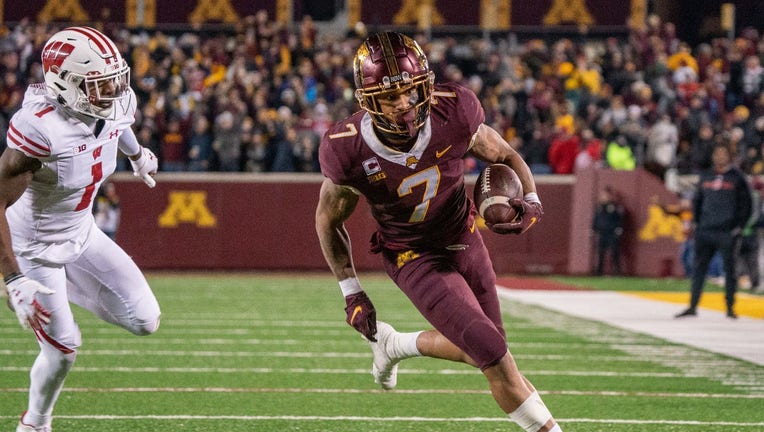 MINNEAPOLIS - Everything was set up for Chris Autman-Bell to have a breakout season in 2021. Rashod Bateman and Tyler Johnson departed for the NFL, making Autman-Bell to top returning receiver and go-to weapon for the Gophers.

Then, in a drill during fall camp at a practice open to the media and public at Huntington Bank Stadium, Autman-Bell got tackled and went down with an ankle injury. He had to be helped off the field by trainers and teammates, taken to the locker room. He avoided major injury, but missed the Gophers’ season-opener against Ohio State.

He made his debut with four catches for 79 yards in a 30-0 win at Colorado, then hurt the ankle again on his first catch against Bowling Green. Despite the injury, Autman-Bell still played in 11 games and led the Gophers with 36 catches for 506 yards and six touchdowns.

With a little more than a week to go before Minnesota’s Spring Game, Autman-Bell looks like he did pre-injury, winning balls in individual drills and catching virtually everything thrown his way.

"Last year was super frustrating. I stayed positive the whole time, kept a smile on my face and just kept pushing. It’s bigger than me, it’s always bigger than me," Autman-Bell said. "This is probably the best I’ve ever felt, just physically-wise. I feel awesome, I feel like I’m taking the day and the process now. Getting better literally every day and taking that step to be a pro."

P.J. Fleck is excited to see what his veteran and top receiver can bring to the Gophers.

"I told you last year, Chris Autman-Bell had the best training camp I’ve seen by a wide receiver since I’ve been coaching. Then he got hurt, wasn’t even there for the first few games, then he came back and got hurt on the first play of one of the games we lost. I’m looking forward to him having a hopefully very healthy season because he looks amazing," Fleck said as Minnesota started spring practice.

Autman-Bell was one of four offensive players to make the decision to return for one more season, getting an extra year of eligibility due to the COVID-19 pandemic. The popular thought was he would be done after last season, but between the injury and coming up short in the Big Ten West, there’s unfinished business.

He’s also got Kirk Ciarrocca back at offensive coordinator, who led one of the most prolific offenses in the history of the program in 2019 as Minnesota went 11-2. The expectation is to get back to that standard this season.

"It was like he never left, man. That’s the guy we need in this program," Autman-Bell said.

Autman-Bell is the top returning receiver with 114 career catches for 1,756 yards and 12 touchdowns. He watched as Bateman and Johnson were stars for the Gophers, and now it’s his turn to be the leader in the receiver room. But he insists he’s not replacing the two former stars.

If Autman-Bell stays healthy and meets his expectations, he could be leading the Gophers to Indianapolis next fall.