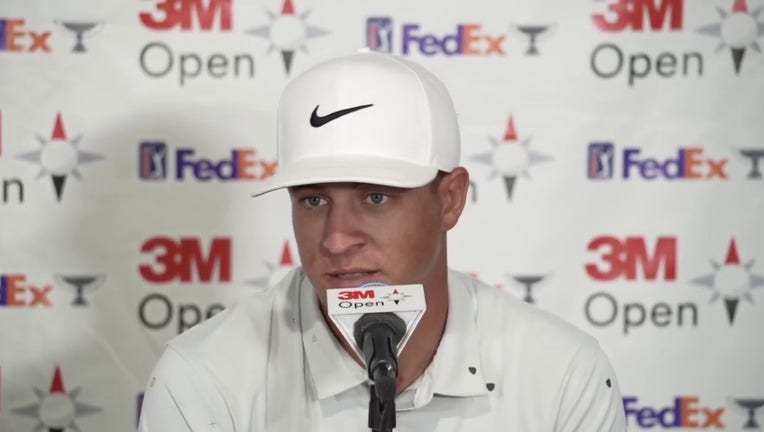 Cameron Champ spoke with reporters Wednesday as he aims to defend his 2021 3M Open title at TPC Twin Cities in Blaine.

MINNEAPOLIS - Cameron Champ is back at TPC Twin Cities in Blaine this week as he aims to defend his 2021 3M Open title, the third of his PGA career.

Champ shot a final round 5-under par 66 last year to win the 3M Open by two shots over Louis Oosthuisen, Jhonattan Vegas and Charl Schwartzel. That’s despite some adventures after a wayward tee shot on the par-5, No. 18 finishing hole. He was able to save par, and it was enough for the win.

3M Open ready to host thousands of fans in Blaine

The 3M Open kicks off at TPC Twin Cities golf club on Thursday, and tournament director Mike Welch says the course is ready to welcome 15,000 to 17,000 fans each day, from Thursday through Sunday.

"We just stuck to our same game plan. It was playing very firm, it was super hot that day. On 18 I made it interesting, I didn’t know I was going to do that. But having 18 in my back pocket, I knew if I made a nice par there, I kind of felt like it was over," Champ told reporters on Wednesday.

He also comes in with a sense of comfort, confident coming back a year later from a victory.

"A place that I have very good memories of. A place that fits me. There’s certain courses that you just show up, you feel comfortable, you like it everything about it. I’m very comfortable with it," Champ said.

That’s despite dealing with heat stroke and dehydration on the back nine, all while trying to hold off the rest of the field. He went to his knees on No. 14, but was able to overcome a hot summer day in Blaine.

"It was very interesting, it hit me on 14 out of nowhere. Kind of hit me like a freight train and I drank a bunch of water, but I didn’t have any sugar or electrolytes," Champ said. "Once I got some of that in me on 16, it gave me a little extra boost. Obviously I was playing on a little adrenaline. When I got done, I was drained."

Since winning last year in Blaine, Champ has had his fair share of adversity. He doesn’t have a win this current season, and has just two top-10 finishes. One of those came at Augusta National in the Master’s. He comes to the 3M Open at No. 157 in the FedEx Cup, needing to get into the top-125 to make the playoffs. He’s missed nine cuts in his last 17 tournaments, including five straight coming to TPC Twin Cities.

He’s also had trying times away from golf. He broke his left wrist last October in an accident at his home, and tested positive for COVID-19 back in January days before he was set to play in the Sentry Tournament of Champions.

He didn’t say how he hurt his wrist, but was worried at the time it was significant. He couldn’t do anything golf-related for more than two months. His wrist was wrapped and had athletic tape while addressing the media on Wednesday.

"This year has been an eventful year to say the least, I’ve had a lot of stuff going on in my personal life mixed in with me breaking my wrist in the fall," Champ said. "That was a whole unknown for quite a while, luckily it wasn’t too serious. I’m in a way better head space, I understand myself better, I understand what my motives are and why I’m doing what I’m doing. I’ve been kind of re-birthed."