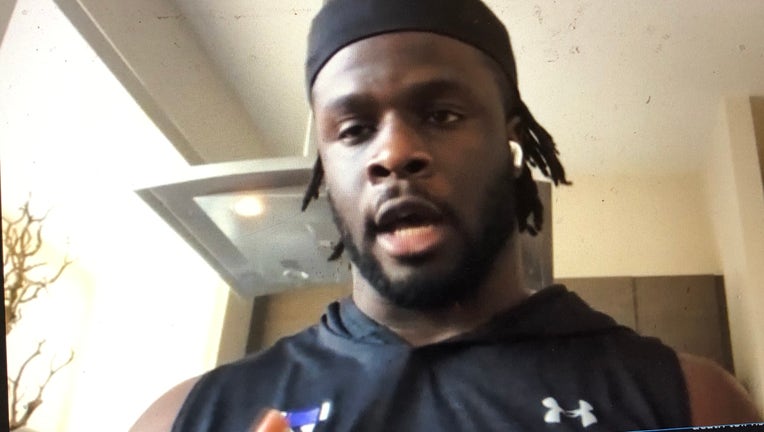 Vikings defensive lineman Ifeadi Odenigbo spoke with reporters Thursday morning about the virtual off-season and the chance to be a starter in 2020.

MINNEAPOLIS - After a breakout season in 2019 and seeing the reality of the business side of the NFL close to home, Ifeadi Odenigbo senses a chance to assume a starting role on the Minnesota Vikings’ defensive line in 2020.

Odenigbo, 26, was taken in the seventh round of the 2017 NFL Draft by the Vikings. He’s been cut twice, had a chance to leave the organization in December 2018 and decided to stay. After seven sacks in 2019, and the departures of Linval Joseph and Everson Griffen, Odenigbo could get his chance to be a starter this season.

With Everson Griffin no longer on the team, Vikings DE Ifeadi Odenigbo is looking to step up for an increased role.

“I had a ‘breakout' year’, so I think my approach this year is just being more efficient. This is my fourth year in the league now so I’ve learned quite a bit and now I can really just coach myself,” Odenigbo said Thursday via Zoom.

And he’s got a defensive line teammate in Danielle Hunter to help serve as a motivator. Hunter has become one of the top defensive ends in the NFL, setting a league record last year by become the fastest to get to at least 50 career sacks in his first five seasons.

Odenigbo says Hunter leads by example and will set the standard for the defensive line if and when players get together later this summer.

“Danielle is a pretty established vet, so I don’t need much motivation because I see that guy go out, bust his butt every single day, never complains and even when I’m working, I’m thinking ‘What’s Danielle doing right now? Danielle is probably doing some crazy stuff, being low key, incognito.’ It’s good to have guys like that,” Odenigbo said.

He admits life is different right now. When the team and the defense get together for Zoom virtual meetings, there’s no Griffen, no Joseph. The team meets daily for about two hours, between meetings for special teams, defense and individual positions.

Odenigbo isn’t going to let himself slow down after his 2019 season. He finished with 23 tackles, a career-high seven sacks that included four in his last five games, a forced fumble and two fumble recoveries.

He explained Thursday how he uses visualization to learn a concept while Andre Patterson, co-defensive coordinator, coaches and teaches doing virtual meetings.

”What I really try to do during the Zoom meetings, especially when the cameras are off, Coach Dre will say things and I kind of get in my stance because no one is able to see me and I start visualizing, I start doing power steps, I start working long arms,” Odenigbo said. “It’s kind of cool that nobody can see me because it starts with visualizing. When you’re able to visualize it, you’re able to apply it.”

That, and the last thing he wants to do is develop bad practice habits before the team convenes, whenever that can happen later this summer.

He admits he’s matured as an NFL player and feels he’s learned the techniques and fundamentals along the defensive line. Odenigbo credits that to learning from Griffen, Joseph and Hunter.

He also had the chance in December 2018 to leave the Vikings for a spot with the Philadelphia Eagles, and opted to stay in Minnesota. He got his opportunity, and made the most of it.

“My dad told me ‘Hey man, son I am proud of you. You are a man now, what you did was a man’s decision.’ I think in hindsight it was an excellent decision,” Odenigbo said.

Now it’s about efficiency, and responding to adversity. He’s not going to let the Covid-19 pandemic, the quarantine and self-isolation become an excuse for not being ready when it’s time for football to be back. He gained perspective from watching the Michael Jordan documentary, “The Last Dance.”

“Adversity hits you, it comes at you in different ways and it’s about how you respond. It’s kind of nice watching that, like hey man, this pandemic, yeah we’re not together, people are using excuses. This is my time to get right,” Odenigbo said.

That mentality could result in him replacing Griffen on the defensive line.