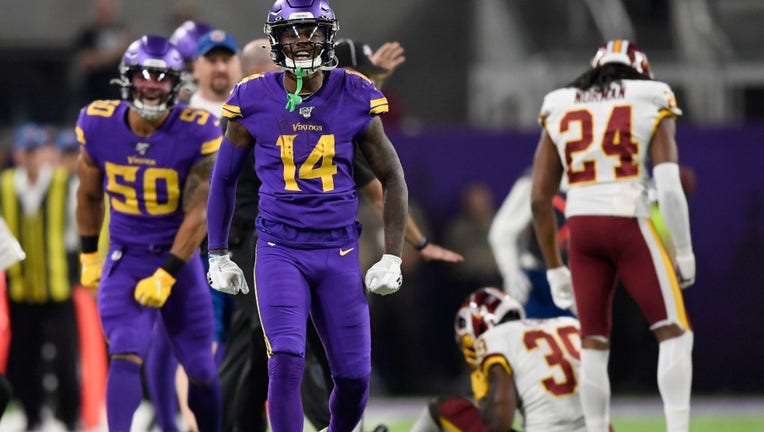 Stefon Diggs #14 of the Minnesota Vikings celebrates a reception against the Washington Redskins during the third quarter of the game at U.S. Bank Stadium on October 24, 2019 in Minneapolis, Minnesota. ((Photo by Hannah Foslien/Getty Images))

Spielman and the rest of the Vikings staff are busy making final preparations for the NFL Draft Thursday-Saturday, which will be done fully virtually due to the Coronavirus pandemic. Spielman held his annual pre-draft session with media, via Zoom, from his Twin Cities home.

He said Tuesday despite plenty of rumors surrounding a Diggs trade, dating back to as recently as the start of last season, he had no intentions of dealing Diggs or entertaining the conversation at the NFL Combine. All 32 general managers attend the weekend of workouts, interviews and evaluation for future prospects, and it’s where most trade conversations start.

“He was a great player for us, great in the community, but then a business opportunity came up as this evolved that we felt was both good for Stefon and was good for us,” Spielman said.

That intention of keeping Diggs changed when the Buffalo Bills came calling with an offer Spielman couldn’t refuse. Four draft picks, including the No. 22 overall pick in the first round Thursday night. That’s quite the return for a player drafted in the fifth round in 2015.

Spielman wouldn’t say when he realized Diggs’ future wouldn’t be in Minnesota, but he got the most out of the situation.

“It just came to a point where the draft capital we were able to get for him, it was a good business decision for us and for him,” Spielman said.

"It became apparent that he wanted to play elsewhere and I think it was smart of the Vikings to grant him that opportunity. It wasn’t a mystery and that’s OK. I wish him really well. He’s a special player, we now have to find a way to move forward," quarterback Kirk Cousins said last week.

Diggs had two of the best seasons of his five-year career with Cousins at quarterback. Last year, Diggs had 63 catches for a career-high 1,130 yards on 94 targets and scored six touchdowns. He averaged a career-high 17.9 yards per catch. That’s despite several weeks of double and sometimes triple coverage with Adam Thielen out five games with a hamstring injury.

Two seasons ago, Diggs caught 102 passes on 149 targets for 1,021 yards and a career-high nine touchdowns. He also provided one of the greatest memories in Vikings’ history, catching a walk-off touchdown in the playoffs to beat the New Orleans Saints, now tabbed the “Minneapolis Miracle.”

“We will always appreciate everything that Stefon has done for us here in Minnesota and wish him nothing but the best,” Spielman said.

But he was also known for a few on-field outbursts, and not showing up to practice after a Week 4 loss at Chicago last season. It was one of a series of things that led to a hefty $200,000 fine from the Vikings. The next day, Diggs was at TCO Performance Center and asked about trade rumors. His response, “I think there’s some truth to all rumors.”

“I won’t get into last year but I know how we felt about Stefon and what a playmaker he was for us.”

Now, Spielman’s task is to find the next receiver to replace Diggs. We’ll find out if that’s through the draft, with it being one of the deepest in recent memory for wide receivers.