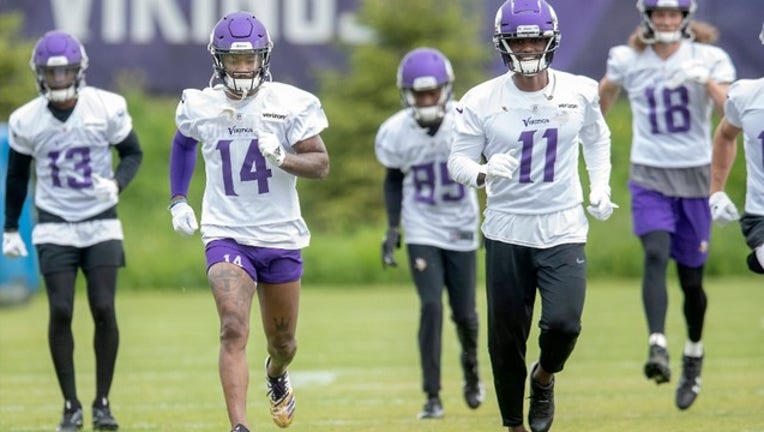 MINNEAPOLIS (FOX 9) - The summer break is over. Football is here.

The Minnesota Vikings officially start Training Camp at TCO Performance Center with their first full team practice on Friday. But rookies and select players will be on the practice field Tuesday morning as coach Mike Zimmer and the Vikings hold their first walk-through and workout.

Training camp can get long and monotonous, but there shouldn’t be a lack of motivation to get better every day. If there’s complacency, they just need to look at their 8-7-1 record last season and missing the NFC Playoffs for the third time in five seasons under Zimmer.

We hope you enjoyed the time off, because football is here. Competition for roster spots is there, and here is a look at the battles before camp starts.

There is no mystery when it comes to the starting quarterback for the Minnesota Vikings. Kirk Cousins enters the second season of his three-year, $84 million fully-guaranteed contract. He had the statistical numbers last season, but it didn’t always translate to wins.

So what happens if Cousins gets hurt? After all, it’s the NFL. Right now, Sean Mannion is the front-runner to be the No. 2 quarterback. He got the majority of second-team snaps in offseason OTAs and minicamp, but rarely saw the field last year behind Jared Goff in Los Angeles. He completed just two passes in three games. Mannion’s competition is Kyle Sloter and Jake Browning, who will likely end up on the practice squad.

We know that Dalvin Cook, healthy after battling a hamstring issue last season, is the Vikings’ primary running back option as he enters his third season. But you can never have enough depth in the backfield, especially if the Vikings actually run the ball as much as they say they want to.

The running back picture got a little clearer on Monday. The Vikings announced they waived Roc Thomas, who had been suspended three games to start the season, for violating the NFL’s substance abuse policy. The current running backs on roster include Ameer Abdullah, Mike Boone, C.J. Ham and third-round pick Alexander Mattison. Abdullah, Boone and Ham got a combined 18 carries last season.

Mattison, a rookie out of Boise State, got the most reps with the second team at minicamp.

The Vikings appear to be creating competition on special teams at the long snapper spot. Kevin McDermott is entering his eighth NFL season, but the Vikings used their final choice of the NFL Draft on Austin Cutting. The Air Force product recently graduated, and worked out an agreement with the service academy to compete for a roster spot with the Vikings while also serving as a recruiter. The Vikings signed Cutting on Monday, and they won't keep two long snappers on the roster.

The job is McDermott’s to lose, but anything can happen in training camp.

The battle for the third wide receiver spot might be the most competitive in camp, largely because it has the most candidates. We know Adam Thielen and Stefon Diggs are the 1-2 punch at wide receiver, they combined for 215 catches, nearly 2,400 receiving yards and 18 touchdowns last season.

The competition for the third receiver spot will include Laquon Treadwell, Chad Beebe, Jeff Badet, Brandon Zylstra, Jordan Taylor and seventh-round picks Olabisi Johnson and Dillon Mitchell. Treadwell should have the inside track, if he can be consistent in training camp. He made a career-high 35 catches last season and had his first career touchdown. Beebe and Zylstra combined for five catches last year.

There should be plenty of competition for snaps on the offensive line in training camp. The Vikings had trouble protecting Cousins last season, and had one of the worst rushing offenses in the NFL. That can all change with more consistent offensive line play.

There’s work to do across the board as the Vikings aim to get back to the NFC Playoffs. Training camp for the full squad starts Friday. Football season is here.