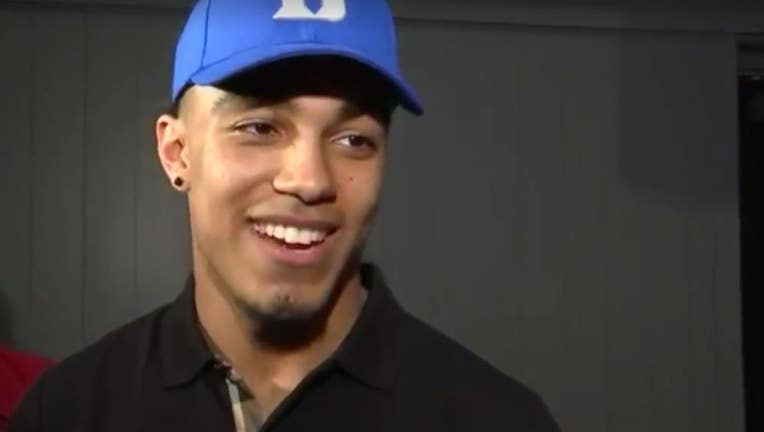 MINNEAPOLIS - The 2020 NBA Draft, whenever it does take place, could have as many as four names that are very familiar to Minnesota basketball fans.

Within the last three weeks, four of the more household names in local high school basketball in recent years all declared for the 2020 NBA Draft. University of Minnesota sophomore Daniel Oturu, a Woodbury native and former Cretin-Derham Hall star, announced he was leaving the Gophers after two seasons, plans to hire and agent and stay in the NBA Draft. Duke sophomore Tre Jones, a former star at Apple Valley, also declared for the NBA Draft has he prepares to follow in the footsteps of his older brother, Tyus.

Late last week, former Champlin Park star guard McKinley Wright announced he is testing the draft waters, but will keep his options open for returning for a final season at Colorado. Most recently, former Hopkins star Zeke Nnaji declared for the NBA Draft and will likely stay in after one season at Arizona. All four have submitted their names to the committee that provides feedback to potential draft prospects. Here’s a look at where they all stand.

Daniel Oturu is set to become the first NBA Draft pick under Minnesota head coach Richard Pitino. He would also be the first Gophers’ player drafted since Kris Humphries in 2004. Oturu finished his sophomore year Second Team All-Big Ten, on the Big Ten’s All-Defensive Team and was named to three All-American teams. He was selected a Sporting News and CBS Sports Third Team All-American, and was named All-America Honorable Mention by the Associated Press.

Oturu averaged 20.1 points, 11.3 rebounds and 2.5 blocks per game in 31 starts for Minnesota this past season. He’s the only player in the NCAA this year to average at least 20 points and 11 rebounds per game. If you look at mock drafts, his stock is all over the board. Tankathon has Oturu going to the Minnesota Timberwolves with the No. 33 pick in the second round. NBADraft.net has him as a potential lottery pick, going to Charlotte at No. 8. NBA Draft Room has him going No. 23 to the Miami Heat.

In 29 starts for the Blue Devils this season, Jones averaged 16.2 points, 6.4 assists and 4.2 rebounds per game. NBADraft.net has Jones going late in the second round to Sacramento. NBA Draft Room has him going at No. 56 to Charlotte. Mock drafts show he has work to do, but proving people wrong has never been a problem for Jones.

Former Champlin Park Star McKinley Wright might be the biggest unknown of the Minnesota names entering the NBA Draft process. Wright is coming off the best season of his career at Colorado, where he averaged 14.4 points and five assists per game for the Buffaloes. He’s been a First Team All-Pac 12 player two straight years, and led Colorado in scoring in his freshman season.

Most mock drafts don’t have him being picked, which means he could elect to return for one more year at Colorado.

Former Hopkins standout Zeke Nnaji, who spent one season at Arizona, is seemingly the only potential lock to be a first round pick. Nnaji led the Wildcats in scoring (16.1 points per game) and rebounding (8.6 per game) in his lone season at Arizona. He won the Pac-12 Freshman of the Year Award and was named First Team All Pac-12.

CBS Sports has Nnaji being taken with the No. 23 pick in the first round to the Denver Nuggets, as does NBADraft.net. NBA Draft Room has him going at No. 19 to the Bucks. Most sites have him as a consensus first round pick.

The NBA has a decision to make about the draft as prospects try to prepare for a life-changing moment later this year. Currently scheduled for June 25 at the Barclays Center in Brooklyn, New York, league officials have to determine if it will be a public event and remain in June due to the Coronavirus pandemic. Draft prospects also have to find a way to work out on their own with team facilities and working out for scouts not an option due to Covid-19. There are more questions than answers at this point.

Regardless, it’s the first time in recent memory Minnesota has had up to four names in the NBA Draft process. There could be more coming, if Rochester native Matthew Hurt decides to try the draft process after one season at Duke.