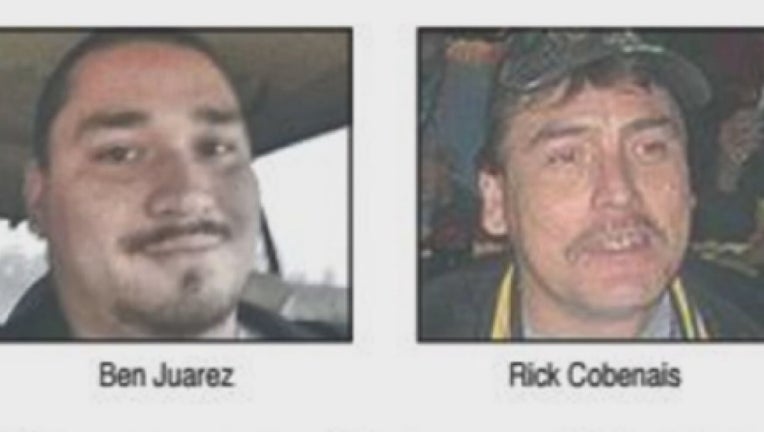 Ben Juarez and Rick Cobenais were killed in the hit-and-run in 2014 in Polk County, Wisconsin. (Polk County Sheriff's Office)

BALSAM LAKE, Wis. (FOX 9) - For the families of Ben Juarez and Rick Cobenais, the hit-and-run crash on County Highway E northeast of Balsam Lake, Wisconsin in January 2014 that claimed the men’s lives had for too long been an open wound.

“We’re so thankful for these people for everything they did,” said David Juarez, Ben’s uncle. “They didn’t give up on us, it’s been seven years.”

A driver has been charged in connection to a hit-and-run crash in Polk County, Wisconsin that killed two men in 2014.

Chief Taylor and Polk County Sheriff Brent Waak were both at the scene that night nearly seven years ago. Ten months ago, authorities shared the cost of producing a video meant to get new attention to a case that had grown cold. It did exactly that and led to a tip in September that led to Wednesday’s arrest.

“Frank and I were meeting, talking about the case, when the captain knocked on my door and said the person is now in custody and that was such a great feeling,” said Sheriff Waak.

Andrew Endres, 32, a volunteer firefighter from Hampton, Minnesota is charged with two counts of hit-and-run, resulting in death. The tipster said Endres had been struggling with the media attention surrounding the cold case and was told by someone he’d been talking to about it.

Endres denied being in the area that day, but cell phone location records show he was at a family cabin a few miles away. Investigators found the black Ford F-150 he drove, which matched parts from the scene. The truck had been sold twice since the incident.

Authorities also found the passenger in the truck, who confirmed they had hit the two men, got scared and fled. The passenger said they returned to the cabin where Endres cleaned the truck with bleach.

“These officers have proven that they just told the rest of the world that no matter where you come from, no matter who you are, your ethnicity, your class - everyone deserves justice,” said Thomas Fowler, Rick Cobenais’ stepson.

“Hopefully we can all forgive… eventually,” said David Juarez.