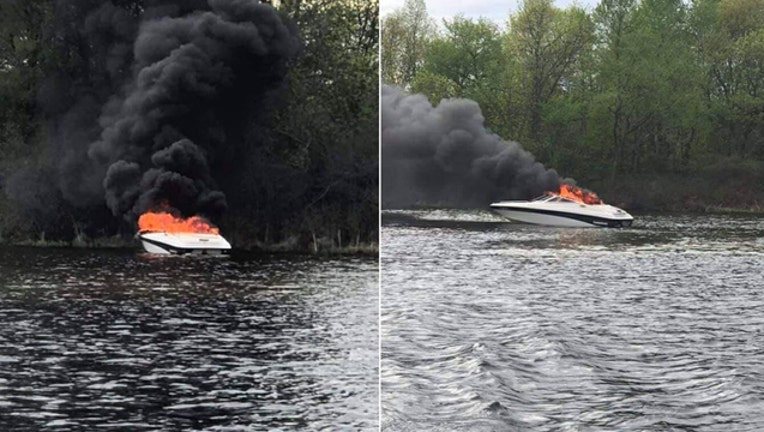 WYOMING, Minn. (FOX 9) - Two women escaped uninjured after their boat caught fire in Chisago County all thanks to the quick actions of some nearby anglers.

It was a frightening start to the boating season for a woman and her mother after their boat caught fire shortly after leaving the launch.

“They heard an explosion come off the back of the boat and it immediately burst into flames,” said Wyoming Police Chief Paul Hoppe.

Wyoming Police shared a photo of the boat engulfed in flames on Comfort Lake that was taken just minutes after the women were rescued by one of the few groups out on the water that day.

“Three guys on a fishing boat heard the small explosion on the boat, turned, noticed the flames coming out of the engine compartment, redirected their boat over to the burning boat and pulled the two gals off the boat,” Hoppe added.

With how quickly the fire moved and the only escape route being frigid waters, the boaters were lucky to be rescued, said Hoppe.

The water is not yet at swimming temperature and Hoppe warned that “hypothermia and exhaustion sets in very quick,” when people enter the water this time of year.

The Chief called the anglers heroes.

“They thought on their feet and leapt into action,” he said. “There was no hesitation and because of that, we have a positive outcome.”

Officials suspect the fire was caused by a gas leak.

Wyoming police had quite the busy weekend, with a "crude homemade IED" found in the middle of the road Saturday night. Luckily, no one was hurt.