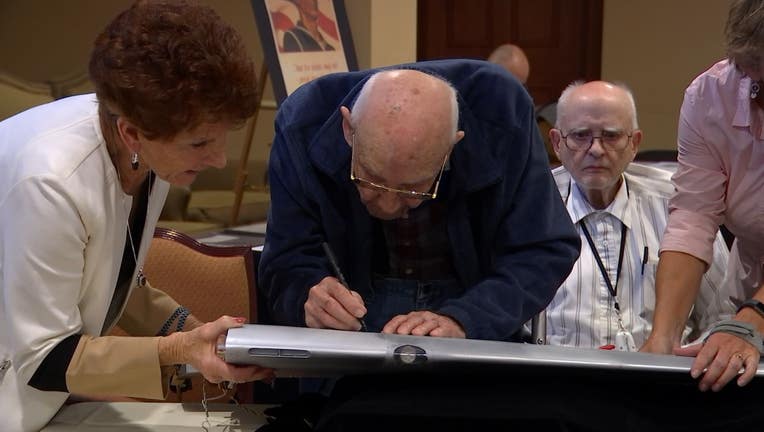 World War II veterans signed the wings of a model plane that will later fly in their honor next year. (FOX 9 Minneapolis-St. Paul)

NORTH OAKS, Minn. (FOX 9) - World War II veterans were honored in a ceremony at the Waverly Gardens Senior Center, which is home to nearly two dozen of these special veterans.

More than 20 men and women who once signed their names to the war effort signed once more to the memories. In this case, it was on the wings of a model plane built to replicate the B-25 bomber, Miss Mitchell.

World War II veterans were honored in a ceremony in at the Waverly Gardens Senior Center, which&nbsp;is home to nearly two dozen of these special veterans.

The commemorative Air Force plane at Flemming Field in St. Paul is the same type of flown by the Doolittle Raiders for the attack on Tokyo in 1942. On this day, it’s also a time machine to honor veterans such as Anne Bidne.

“I grew up in Des Moines where the Army was training the women for the Army, and I somehow thought I’d prefer the Navy,” said Bidne, a WWII U.S. Navy veteran.

John Schelenrich was in the Army and fought against Germany in the Battle of the Bulge.

“I’m remembering the first few days of combat,” said Schelenrich. “We were in fox holes and in the morning, I discovered a dead GI a couple of feet away from my fox hole.  I didn’t know who he was and I never did find out who he was. He was dead with a shrapnel wound right through his helmet. That was kind of a shock.”

That’s exactly why plane builder Chuck Schuneman wants their signatures on these wings.

"This war that these guys fought in is the reason why we’re able to stand here in our freedom,” said Schuneman. 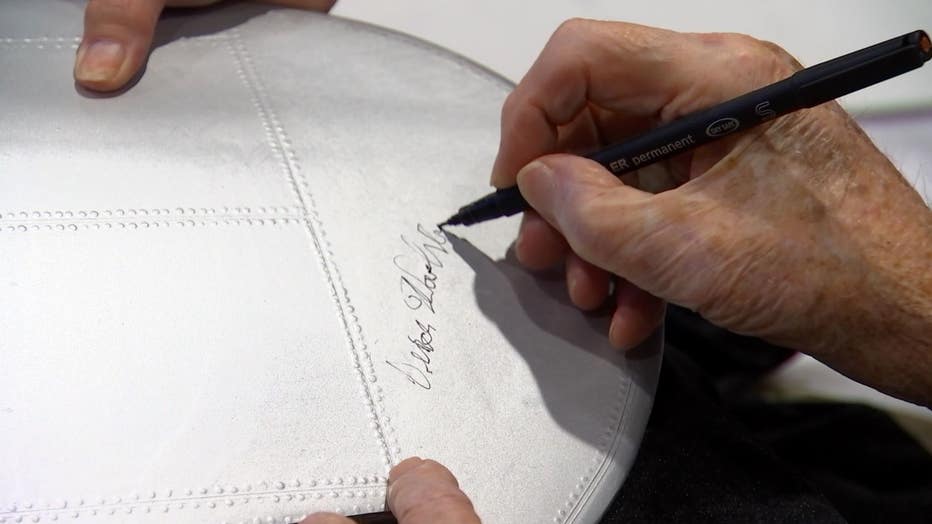 It’s all because decades ago they signed their names to an effort and cause bigger than themselves.

“We didn’t come back for any special recognition, so this was special from the fact that we are still here,” said Bidne.

Schuneman’s goal is to eventually fly his model plane at a special ceremony next August where he will retire it and donate it to the Commemorative Air Force Museum at Flemming Field.