NASA's Mars 2020 Perseverance Rover is heading to the Red Planet to search for signs of ancient life, collect samples for future return to Earth and help pave the way for human exploration. (Courtesy: NASA)

WASHINGTON - New images released by NASA reveal what looks like a crashed flying saucer on the planet Mars belonging to aliens.

And while it may appear this way, the space agency says that’s not the case.

According to NASA, the agency’s Ingenuity Mars Helicopter recently surveyed the parachute that helped the agency’s Perseverance rover land on Mars, along with a cone-shaped backshell that protected the rover in deep space during its descent toward the Martian surface on February 18.

"The aeroshell, which protected the Perseverance rover and Ingenuity helicopter during its plunge through the Martian atmosphere a little over a year ago, bears a pretty strong resemblance to the flying saucers of science fiction," Al Chen, a Mars 2020 Perseverance lead at NASA’s Jet Propulsion Laboratory (JPL), told FOX TV Stations Group. "But this time, it’s our human made spacecraft that are the ‘aliens’ visiting another world and instead of fiction, it’s fact. The images are everything we could have hoped for – they’re high resolution, clear, and will provide a wealth of engineering data to pour over to help us continue to improve our ability to land on Mars. Stepping back, it’s awe-inspiring, even for us, to think that these images were taken by the first helicopter ever flown on another planet." 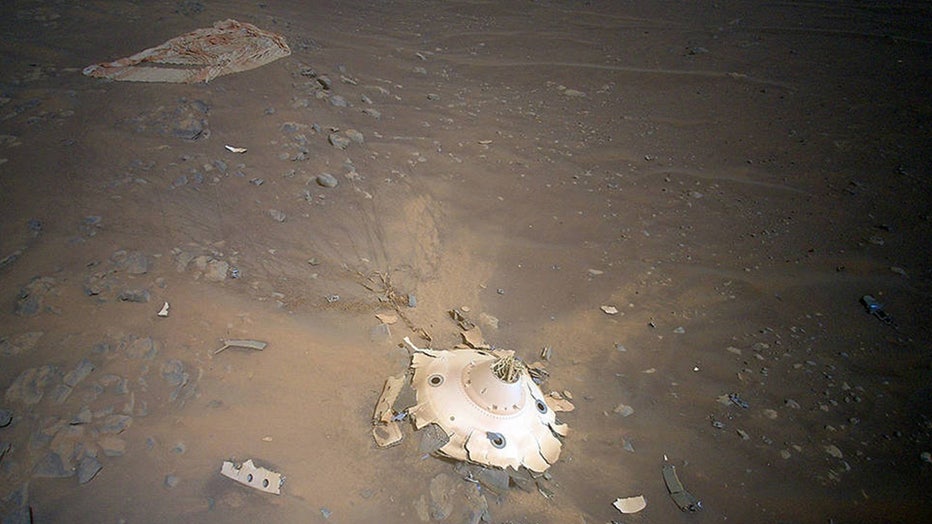 This image of Perseverance’s backshell and parachute was collected by NASA’s Ingenuity Mars Helicopter during its 26th flight on April 19, 2022. Images obtained during the flight may provide insight into the components’ performance during the rover’s

The parachute and backshell detached from the descending rover at an altitude of 1.3 miles. The images show the backshell, partially shattered after hitting the surface at about 78 mph. The backshell’s protective coating appears to have remained intact.

Meanwhile, the parachute can be seen spread out and covered in dust. At 70.5 feet wide, it was the biggest ever deployed on Mars, and the canopy currently shows no signs of damage from the supersonic airflow during inflation. The parachute and backshell were previously imaged from a distance by the Perseverance rover. 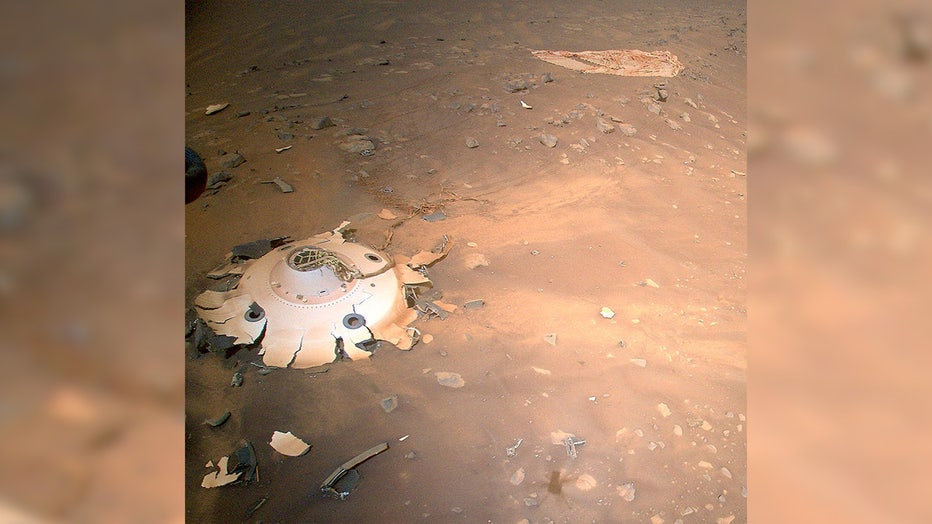 This image of the backshell and supersonic parachute of NASA’s Perseverance rover was captured by the agency’s Ingenuity Mars Helicopter during its 26th flight on Mars on April 19, 2022. (Credit: NASA/JPL-Caltech)

"The aeroshell protects the spacecraft from the intense heating and deceleration of atmospheric entry. The supersonic parachute helped slow the spacecraft from around 1000 mph to 180 mph. Since 180 mph is still too fast to land safely, the aeroshell and parachute were jettisoned at about 1.3 miles above the ground and the rest of the descent was completed using rocket engines," Chen continued. "The jettisoned aeroshell and parachuted continued to fall to where we can see them in these images and likely hit the ground around 80 mph. The aeroshell wasn’t designed to survive a ground impact of that speed so it’s not surprising that it has broken up a bit."

NASA says the images have the potential to help ensure safer landings for future spacecraft such as the Mars Sample Return Lander — a campaign that will bring Perservence’s samples of Martian rocks, atmosphere and sediment back to Earth for analysis.

"Perseverance had the best-documented Mars landing in history, with cameras showing everything from parachute inflation to touchdown," said JPL’s Ian Clark, former Perseverance systems engineer and now Mars Sample Return ascent phase lead. "But Ingenuity’s images offer a different vantage point. If they either reinforce that our systems worked as we think they worked or provide even one dataset of engineering information we can use for Mars Sample Return planning, it will be amazing. And if not, the pictures are still phenomenal and inspiring."

Last February, Perseverance arrived at Mars’ Jezero Crater — a former lakebed and river delta — in search of rocks that could contain evidence of past Martian life.

Then, last April, Perseverance extracted oxygen from the red planet’s atmosphere successfully, marking the first time in history a man-made device was able to isolate oxygen on another planet.

In September, the rover completed its first sample grab, tucking away a tube of rock for return to Earth for analysis.

Then, in December, the rover made a remarkable discovery when scientists discovered the six-wheeled machine has been traversing on the site of an ancient Martian lake where magma once flowed.

According to NASA researchers, the rover’s latest findings were "completely unexpected," as it was previously speculated that the land the rover is traveling on was sedimentary, not hardened lava.

When Perseverance first arrived, scientists knew the rover was landing on an ancient lakebed. But they initially thought the material of the land was made up of sediment from rocks and other geological material deposited by the lake. The discovery confirmed that the material was actually rock hardened from flowing magma which adds clues to the history of the region.

NASA scientists say the discovery will help them better understand the geological timeline of events that took place in the Jezero Crater. The rover will continue to characterize the planet’s geology and past climate and pave the way for human exploration of the red planet.