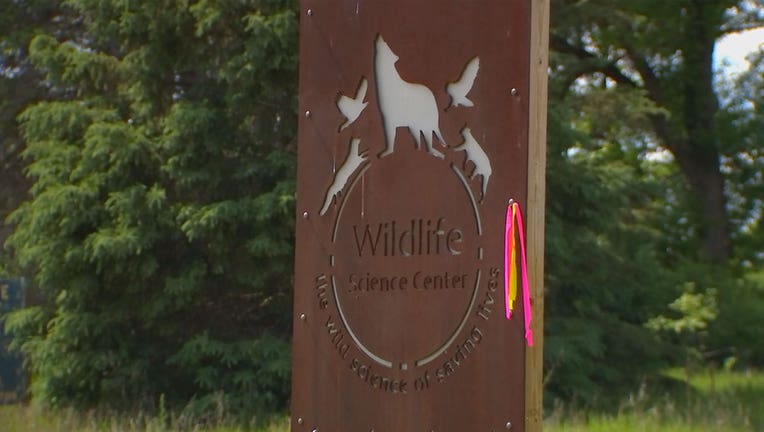 The Wildlife Science Center says four of its wolves escaped over the weekend and three of them are still at large.

STACY, Minn. (FOX 9) - Staff at a wildlife center about an hour north of Minneapolis are doing everything they can to find a group of wolves that managed to escape from the property last week.

In Anoka County, the Wildlife Science Center is home to 120 wolves.

Staff at a wildlife center about an hour north of Minneapolis are doing everything they can to find a group of wolves that managed to escape from the property last week.

Recently, the population grew with the birth of a new pup; however, when the pup was removed to be bottle fed, the pack lost its mind.

"Overnight we have a six foot ground apron, they dug down, over the ground apron and up and went looking for their puppy," Beckel explained.

Four wolves escaped that night, out of a pack of 10. They were likely determined to find the pup they believed was missing, and they’ve now been missing themselves since Thursday.

"We’re devastated, the wolves are scared, they’re not dangerous to anybody they just want to go home," Beckel said.

Sadly, hopes of recovering all four have vanished; the father of the pup was among the four that left and he is now dead.

"Unfortunately one male was hit by a car, he did not die, we had to put him to sleep, he broke his back," Beckel said.

In the days since neighbors report seeing the animals around town.

"It was definitely a wolf, I knew that," David Crever said. "I wasn’t expecting to see that on my way to work. A little smaller than wild timberwolves that I’m used to seeing but definitely not a domestic dog. It’s the first time I’ve seen a wolf around here [in about 20 years]."

The surviving animals could be hungry, having never had to hunt for their own food before, and the wildlife center says people in the area are on the hunt for them.

"That is the downside to the public knowing is everybody wants to shoot shovel and shut up with wolves," Beckel said. "None of us are sleeping, anytime our phone rings we’re jumping, did somebody shoot them, did somebody hit them, what’s going on."

Anyone who spots one of the wolves is asked to call the Wildlife Science Center immediately at 651-464-3993.