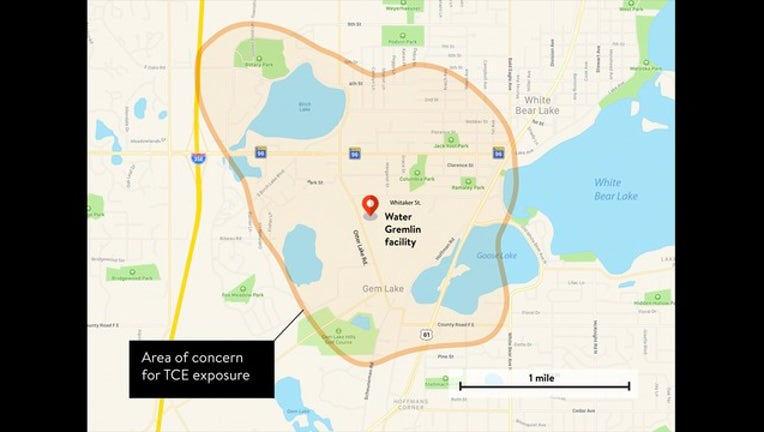 A map of the area of concern for TCE contamination in White Bear Township. (Credit: Water Gremlin)

WHITE BEAR TOWNSHIP, Minn. (FOX 9) - Residents of White Bear Township may have been exposed to an industrial solvent used by a local manufacturer, according to the MPCA.

The company is Water Gremlin Inc., which operates under an air quality permit from the MPCA. The company makes fishing sinkers and battery terminal posts.

The MPCA now says that the company was emitting too much trichloroethylene (TCE) into the air in White Bear Township. Water Gremlin agreed to shut down their production after an MPCA request.

The MPCA is now investigating the “extend and magnitude of the emissions,” according to a release Thursday.

TCE is a solvent used to degrease metal parts during the manufacturing process. You cannot see or smell it, but breathing it over a long period of time can have negative health effects.

According to the Minnesota Department of Health website, TCE can impact the immune and reproductive systems, liver, kidneys, central nervous system and may affect fetal development during pregnancy. In addition, long-term exposure can increase the risk of kidney cancer and the risk for developing non-Hodgkin’s lymphoma and liver cancer.

The MPCA says Water Gremlin has equipment that should limit TCE emissions, but that the equipment was not function properly and may not have been for some time.

The facility is cooperating with the MPCA’s requests while the TCE line is shut down. The public is not being exposed to the chemical at this time.