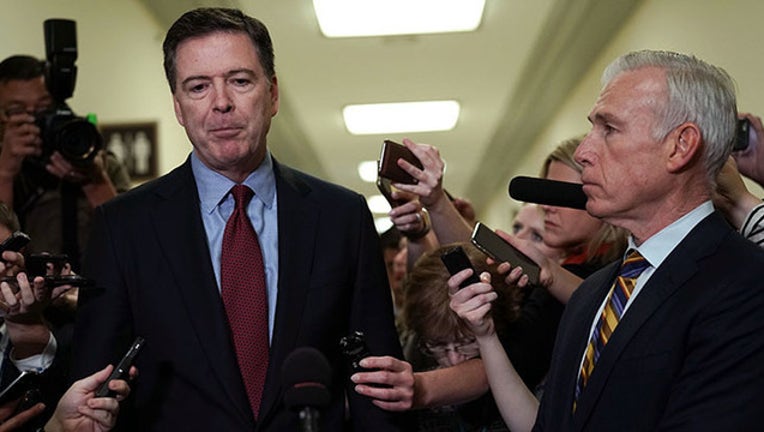 Former Federal Bureau of Investigation Director James Comey speaks to members of the media at the Rayburn House Office Building after testifying to the House Judiciary and Oversight and Government Reform committees. (Photo by Alex Wong/Getty Images)

The watchdog's office said Comey broke FBI rules by giving one memo containing unclassified information to a friend with instructions to share the contents with a reporter. Comey also failed to notify the FBI after he was dismissed that he had retained some memos in a safe at home.

Comey wrote a series of memos about conversations with Trump that he said unnerved him. Comey has said he wanted to make a record of the interactions because he was concerned Trump might later lie about them, and that he wanted to make the contents of one of the memos public in hopes of triggering the appointment of a special counsel to lead the FBI's investigation into ties between Russia and the Trump campaign.

The department has already decided not to prosecute Comey over the matter.

Lawyers for Comey did not immediately return messages seeking comment. But Comey himself noted on Twitter that the inspector general found no evidence that Comey or his lawyers had ever shared any classified information with the news media.

"I don't need a public apology from those who defamed me, but a quick message with a "sorry we lied about you" would be nice," he wrote.

He also added: "And to all those who've spent two years talking about me "going to jail" or being a "liar and a leaker"_ask yourselves why you still trust people who gave you bad info for so long, including the president."