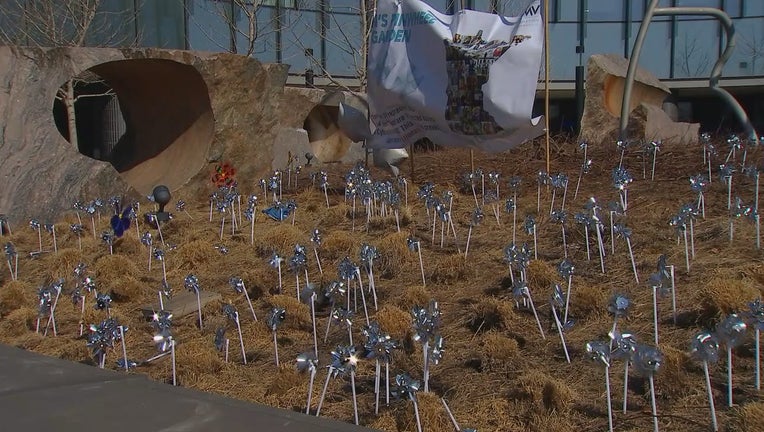 Pinwheels mark Vivian's Garden at the University of Minnesota. (FOX 9)

MINNEAPOLIS (FOX 9) - A group of Minnesota families affected by the debilitating cytomegalovirus is continuing to push for increased awareness of the illness in infants.

It’s hard to miss the 400 pinwheels they planted on the University of Minnesota campus on Saturday, one pinwheel for each baby born with CMV in Minnesota every year.

A group of Minnesota families affected by the debilitating cytomegalovirus is continuing&nbsp;to push for increased awareness of the illness in infants.

The families that planted the garden did so to bring attention to the life-changing condition that can cause hearing loss in infants. Many people have never heard of CMV until it’s too late.

"Our life has changed completely since the diagnosis," Henrikson said. "Vivian was diagnosed at two days old. It was a really surprising diagnosis for us and we asked what many families ask, what is CMV?"

"CMV is the most common viral infection you’ve never heard of. 1 in 150 babies [are] born nationally with this virus and 1 in 200 Minnesota babies are born with this virus."

University of Minnesota Professor of Pediatrics Dr. Mark Schleiss has investigated the virus for more than 30 years.

"If it’s acquired before you’re born from the mother, it can cause hearing loss, cerebral palsy, epilepsy," Dr. Schleiss said.

On Saturday families who have children with CMV showed up in support of legislation they say is part of a solution to the problem.

"It’s truly down the road giving our kids a better potential so they can live up to their full potential," Steidl said. The proposed legislation is named Vivian’s Act, and it is years in the making.

"Vivian has inspired me and inspired these families here," Henrikson said "She is - even at seven years old - inspiring change in the state."

"It is preventable, it can be prevented, but you can’t prevent something that you don’t know about," Steidl said.

Vivian’s Act would also add the CMV to a list of conditions babies are tested for at birth in Minnesota, making early intervention more possible, "so other families don’t have to experience what we have," Henrikson said.

Vivian’s Act was heard by a Minnesota Senate committee last week, and its sponsors hope to have it heard in the house soon.