Firefighters captured video of a twister touching down in Pender County, North Carolina as Dorian moved past the coast.

PENDER COUNTY, N.C. - Hurricane Dorian inched closer to the Carolinas on Thursday, bringing with it predicted high storm surge, power outages, flooding and the threat of tornadoes across the region.

The National Hurricane Center said Dorian was a Category 3 storm as of Thursday morning, with maximum sustained winds at 115 mph. It was moving north at 7 mph and located about 70 miles south-southeast of Charleston, South Carolina. 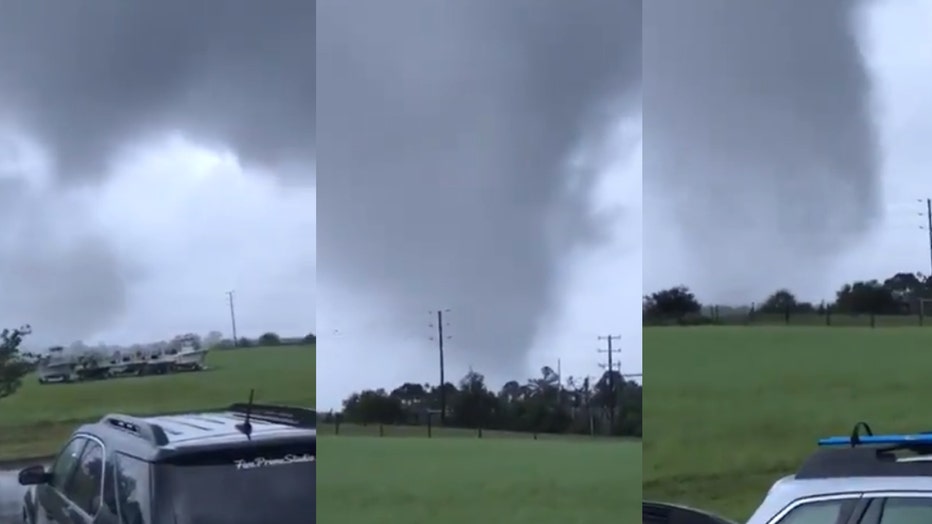 Several tornado warnings were issued by the National Weather Service along the outer bands of the storm. A possible sighting was captured on video early Thursday by a man in North Myrtle Beach.

“Out checking on some properties we manage and this happened,” Wayne White wrote on Twitter.

Other tornadoes were reported in the Carolinas, including one a bit farther north. Firefighters captured video of a twister touching down in Pender County, North Carolina as Dorian moved past the coast.

The video was shared on Twitter by the National Weather Service in Wilmington.

Forcasters said residents should seek shelter inside a sturdy building if a tornado warning is issued.

An estimated 3 million people in Florida, Georgia and the Carolinas were warned to evacuate as the storm closed in with the potential for life-threatening storm surge. Navy ships were ordered to ride it out at sea, and military aircraft were moved inland.

At least two deaths were reported on the U.S. mainland, in Florida and North Carolina, both involving men who fell while getting ready for the storm.

The National Hurricane Center's projected track showed Dorian passing near or over the Outer Banks on Friday, lashing the thin line of islands that stick out from the U.S. coast like a boxer's chin. Dorian was then expected to peel away from the shoreline.

In an assault that began over Labor Day weekend, Dorian pounded the Bahamas with Category 5 winds up to 185 mph, obliterating entire neighborhoods and triggering a humanitarian crisis. It weakened to a Category 2 before strengthening again late Wednesday.

About 830,000 people were under mandatory evacuation orders on the South Carolina coast alone.

More than 1,500 people sought refuge in 28 shelters in South Carolina, where rain began falling late Wednesday in the historic port city of Charleston, situated on a peninsula that is prone to flooding even from ordinary storms.