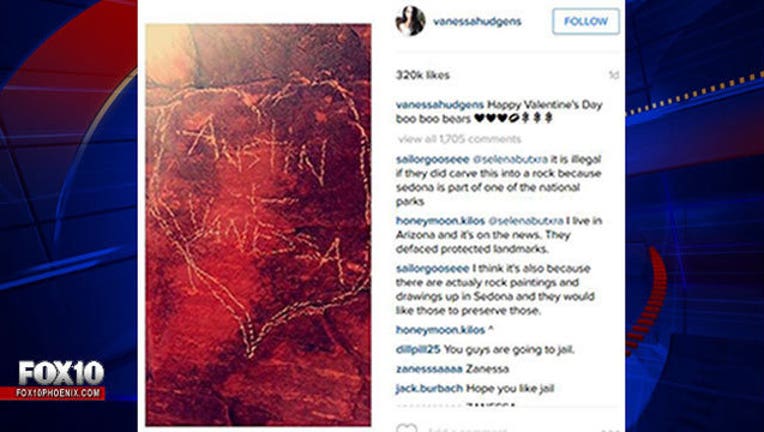 SEDONA, Ariz. (KSAZ) - A warning to visitors from the Coconino National Forest reads, "take only pictures, leave only footprints."

It appears singer Vanessa Hudgens followed only half that warning when she visited Sedona over Valentine's Day weekend.

From her Instagram page, it seems the 27-year-old took video and pictures of her weekend trip to Sedona, but she also Instagrammed what appears to be a heart-etched on a rock with her and her boyfriend's name on it.

"She probably didn't realize that it was against the law to do that and she's probably very embarrassed right now," said Rosanna Shooshtary, who was visiting Sedona.

Others, however, were not so forgiving.

No one has reported seeing the heart on a rock out in the Sedona wilderness, but here's why the forest service takes this so seriously.

"Graffiti breeds graffiti, where people see graffiti on the National Forest they think this is OK to do here, so then another person carves on the rock and before you know it, the national beauty is gone," said Nicole Branton, a District Ranger with the Coconino National Forest.

If they forest service finds proof that Hudgens is responsible for defacing the rock, she could face a maximum $5,000 fine and six months in jail, however, no one expects that to happen.

Fox 10 reached out to Hudgens' agent in Los Angeles, but we never heard back.

As of Tuesday morning, the picture has nearly 2,000 comments and over 320,000 likes on Instagram, however, it was removed from her page by the afternoon.

The picture was posted to Instagram on Monday and Hudgens posted other pictures that show her overlooking the mountains of Sedona, including one with her boyfriend Austin Butler.

Hudgens starred in High School Musical and Grease: Live. She has not responded to the negative comments posted on her Instagram page.