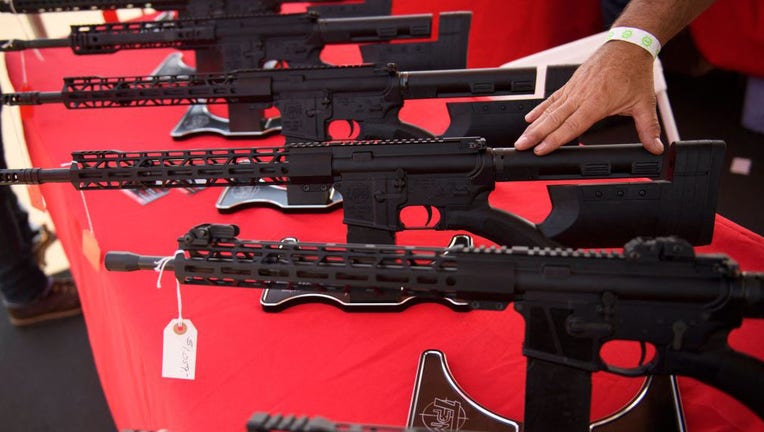 A TPM Arms LLC California-legal featureless AR-15 style rifle is displayed for sale at the company's booth at the Crossroads of the West Gun Show in Costa Mesa, California. (PATRICK T. FALLON/AFP via Getty Images)

WASHINGTON - A new report released by The Bureau of Alcohol, Tobacco, Firearms, and Explosives (ATF) reveals that gun production in the nation has tripled over the past 20 years.

The report released Tuesday is an in-depth look at the rise in gun commerce and trafficking. It’s part of an effort by the Biden administration to address the ongoing problem of gun violence and mass shootings, including a deadly shooting last weekend at a Buffalo supermarket that left 10 people dead.

RELATED: President Biden in NYC to talk about gun violence

According to the report, the number of guns produced in the United States and exported by American manufacturers rose by 350% since 2000. Over the past 10 years, the pistol has become the main gun-type made and purchased in the U.S. The amount of short-barreled rifles manufactured per year increased by 24,080% between 2000 and 2020.

"Last year, I directed ATF to undertake its first comprehensive study of criminal gun trafficking in over two decades," Attorney General Merrick Garland said in a statement. "The first volume published today provides critical, data-driven insights on firearms commerce and technology trends that will inform our efforts to understand and disrupt gun trafficking networks. We will continue to work alongside our partners to provide valuable lessons that will help agents, prosecutors, and policymakers tackle modern criminal gun trafficking enterprises."

RELATED: Ghost guns: What are they and why they are an issue nationwide

The agency’s report also examined the increase in "privately made firearms" commonly known as "ghost guns.," homemade firearms that are purchased without a background check. These guns have been difficult for authorities to trace because the weapons lack serial numbers. The parts to make these weapons are available online for consumers to buy without background checks.

Data shows that criminals are manufacturing privately made firearms in the U.S. and internationally. The number of these weapons recovered by law enforcement and traced by the ATF increased by 1,000% between 2016 and 2021.

President Joe Biden has acted to crack down on ghost guns. He has worked to tighten regulations on pistol-stabilizing braces like the one used in a Boulder, Colorado, shooting that left 10 people dead. He’s also encouraged cities to use their COVID-19 relief dollars to help manage gun violence.

Last month, Biden announced the nomination of Steve Dettlebach, who served as a U.S. attorney in Ohio from 2009 to 2016, to run the ATF. The president had to withdraw the nomination of his first ATF nominee, gun-control advocate David Chipman, after it stalled for months because of opposition from Republicans and some Democrats in the Senate.

In February, the president said he asked members of Congress to provide funding to reduce violent crime. Biden also said they must pass legislation requiring background checks on all gun sales, banning assault weapons and high-capacity magazines, and eliminating immunity for gun manufacturers.

Congress has deadlocked on legislative proposals to reform gun laws for a decade, and executive actions have faced stiff challenges in federal courts — even as the Democratic base has grown more vocal in calling on Biden to take more action.

Cities cracking down on gun trafficking

Los Angeles and New York are among the cities with federal strike forces aimed at cracking down on gun trafficking. Federal agents are working with police departments across the country, and the U.S. Marshals Service regularly conducts fugitive sweeps to arrest people with outstanding state or federal warrants.

FOX 5 New York, FOX 9 Minneapolis, FOX 13 Seattle and The Associated Press contributed to this story. This story was reported from Washington, D.C.