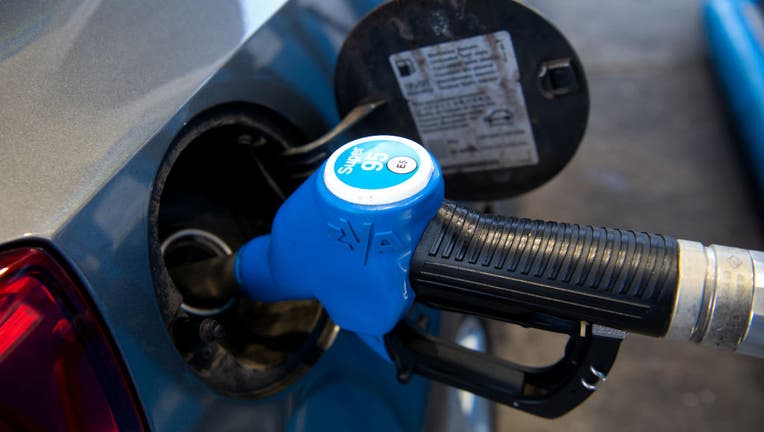 FILE A pump nozzle labeled "Super 95" is stuck in the tank opening of a vehicle at a gas station. (Photo by Sven Hoppe/picture alliance via Getty Images)

WASHINGTON - Gas prices in the U.S. are expected to continue climbing through the summer, according to analysts — citing a hike in global oil costs amid the Russian invasion of Ukraine and ongoing inflation issues.

Gas prices in the U.S. averaged $3.78 a gallon on Friday, up about $0.20 a gallon from a week ago, according to Patrick De Haan, head of petroleum and analysis at fuel-savings app GasBuddy. In Los Angeles County, California, the average price of regular gasoline topped $5 for the first time this week.

GasBuddy this week released its updated outlook for the national average price of gasoline through 2022, showing that the average price per gallon could reach up to $4.25 in May and remain above $4 per gallon through October.

The outlook also forecasts that the overall yearly average in 2022 will stand at $3.99 per gallon. It notes that individual U.S. states will vary based on their location and taxes. California, for example, tends to be considerably higher than other states like Texas and Oklahoma.

Most expensive gas prices in US

What is driving rising gas prices?

AAA said an increase in gas demand and a reduction in total supply contribute to rising pump prices, but increasing oil prices play "the lead role" in pushing gas prices higher. It noted how Russia’s violent invasion of Ukraine that began on Feb. 24 has roiled the oil market, with crude spiking briefly to over $100 per BBL (barrel of crude oil) before settling back into the mid-$90s.

"Russia’s invasion and the responding escalating series of financial sanctions by the U.S. and its allies have given the global oil market the jitters," Andrew Gross, AAA spokesperson, said in a statement. "Like the U.S. stock market, the oil market responds poorly to volatility."

The Russian army is "firing from all sides" at Zaporizhzhia nuclear power plant in southern Ukraine, the country’s foreign minister Dmytro Kuleba tweeted on Friday. The plant is the largest nuclear power station in Europe.

"It’s an explosive situation, and a grim reminder that events on the far side of the globe can have a ripple effect for American consumers," Gross added.

Meanwhile, Federal Reserve Chair Jerome Powell warned this week that Russia's invasion of Ukraine will likely further magnify the high inflation that has engulfed the U.S. economy. But Powell added that he's committed to doing whatever it will take to slow inflation, underscoring the Fed's high-risk challenge in raising interest rates enough to stem price increases without tipping the economy into another recession.

Consumer prices have already risen at the fastest pace in four decades, jumping 7.5% in January compared with 12 months earlier. Gas prices are a key driver of that increase, having soared 40% over the past year overall.

In the view of most economists, the surge in inflation is largely a consequence of a shortage of labor and components resulting from bottlenecked supply chains, much of it resulting from the global economy’s swift rebound from the pandemic recession.