LOS ANGELES (FOX News) - For the first time, the U.S. Navy has acknowledged that the three UFO videos that were released by former Blink-182 singer Tom DeLonge and published by The New York Times are of real "unidentified" objects.

Gradisher added that “the ‘Unidentified Aerial Phenomena’ terminology is used because it provides the basic descriptor for the sightings/observations of unauthorized/unidentified aircraft/objects that have been observed entering/operating in the airspace of various military-controlled training ranges.” 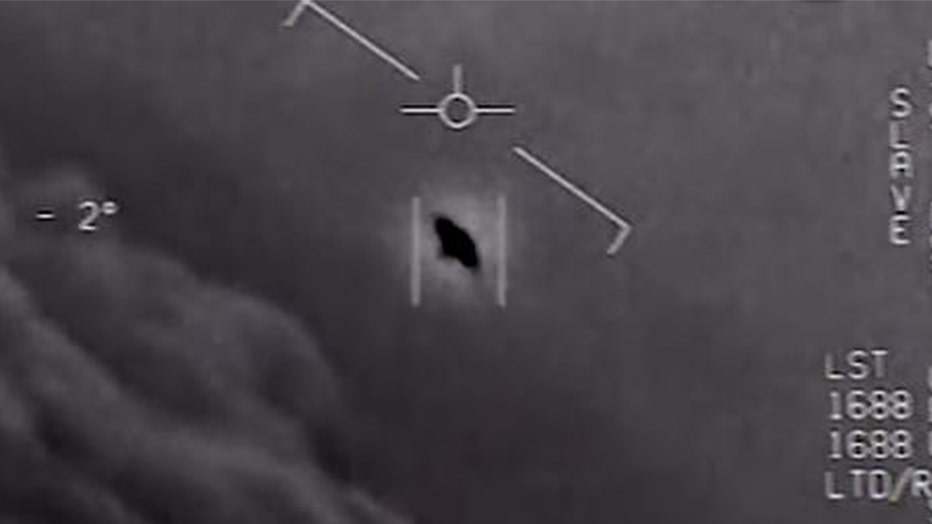 The statement has been corroborated with other media outlets. Fox News has reached out to the Navy for additional comment for this story.

The videos in question, known as "FLIR1,” “Gimbal” and “GoFast,” were originally released to the New York Times and to The Stars Academy of Arts & Science (TTSA). In December 2017, Fox News reported that the Pentagon had secretly set up a program to investigate UFOs at the request of former Sen. Harry Reid, D-Nev.

In June 2019, Reid, now retired, expressed his desire for lawmakers to hold public hearings into what the military knows. "They would be surprised how the American public would accept it," he said during a wide-ranging interview with a Nevada radio station. "People from their individual states would accept it."

John Greenewald, Jr., who publishes The Black Vault, told Motherboard he was surprised at the language the Navy used in its official statement.

“I very much expected that when the U.S. military addressed the videos, they would coincide with language we see on official documents that have now been released, and they would label them as ‘drones’ or ‘balloons,’” Greenwald told the news outlet. “However, they did not. They went on the record stating the ‘phenomena’ depicted in those videos, is ‘unidentified.’ That really made me surprised, intrigued, excited and motivated to push harder for the truth.”

Luis Elizondo, the former head of the Pentagon's Advanced Aerospace Threat Identification Program (AATIP), has previously said that people should pay attention to the comments the government is making about UFOs.

"What the pilots encountered that day was able to perform in ways that defied all logic and our current understanding of aerodynamics," Elizondo wrote in a Fox News op-ed of the 2004 encounter by U.S. Navy pilots who witnessed the object off the coast of San Diego. "Furthermore, beyond what the pilots saw with their own trained eye, the technological feat they encountered was further verified by the impressive Aegis SPY-1 radar, America’s premier radar system at the time, and even gun camera footage and sonar systems from submarines accompanying the carrier.

Earlier this year, the Navy issued new classified guidelines on how to report such instances “in response to unknown, advanced aircraft flying into or near Navy strike groups or other sensitive military facilities and formations.”

The Defense Department also briefed Senate Intelligence Committee Vice Chairman Mark Warner, D-Va., in June, along with two other senators, as part of what appeared to be heightened efforts to inform politicians about naval encounters with unidentified aircraft.

Warner's spokesperson indicated that the senator sought to probe safety concerns surrounding "unexplained interference" naval pilots faced, according to Politico. The outlet reported more briefings were being requested as news surfaced that the Navy revised its procedures for personnel reporting on unusual aircraft sightings.

President Trump said he has been briefed on Navy pilots' reported sightings of unidentified flying objects, but remained skeptical of the existence of UFOs. "I want them to think whatever they think," Trump told ABC News' George Stephanopolous earlier this year, referring to the Navy pilots. "I did have one very brief meeting on it. But people are saying they’re seeing UFOs. Do I believe it? Not particularly."