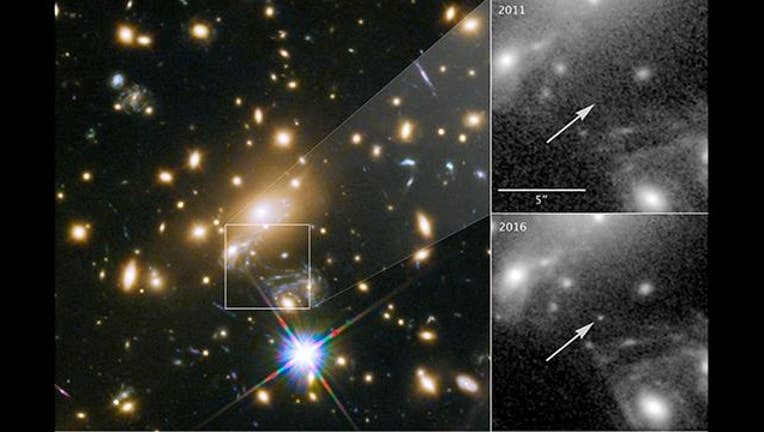 Icarus, officially named MACS J1149+2223 Lensed Star 1, is the farthest individual star ever seen. It is only visible because it is being magnified by the gravity of a massive galaxy cluster. Credit: NASA, ESA, and P. Kelly (University of Minnesota)

MINNEAPOLIS (KMSP) - A new technique to find individual stars in distant galaxies is shedding new light on the universe.

An international research team led by a University of Minnesota professor discovered a blue supergiant star, making it the farthest individual star ever seen.

The star's official name is MACS J1149+2223 Lensed Star 1, but the scientists nicknamed it Icarus after the Greek mythological character whose wings melted after flying too close to the sun.

Normally, the team wouldn't be able to see the star. A cosmic phenomenon called "gravitational lensing," however, acted as a natural magnifying glass in space. In Icarus' case, a massive cluster of galaxies in between Earth and the galaxy containing Icarus acted as the magnifier. The galaxy cluster bent and amplified Icarus' light enough so it could be seen on NASA's Hubble Space Telescope.

“This is the first time we’re seeing a magnified, individual star,” lead researcher Patrick Kelly, a University of Minnesota assistant professor of physics and astronomy, said in a press release. “You can see individual galaxies out there, but this star is at least 100 times farther away than the next individual star we can study, except for supernova explosions.”

Icarus is about 36 trillion miles away from Earth, which means it took nine billion years for its light to reach our planet. As a blue supergiant star, Icarus is much larger, hotter and potentially hundreds of thousands of times brighter than the sun.

The research team also used the discovery of Icarus to test a theory of dark matter.