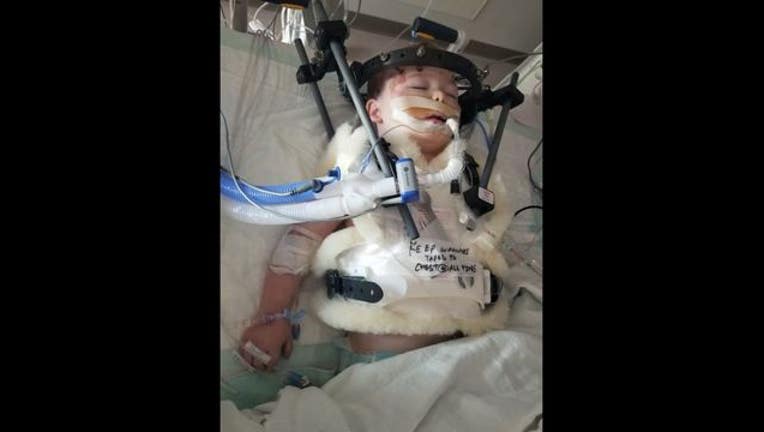 MINNEAPOLIS (KMSP) - A two-year-old boy injured in a crash at a north Minneapolis park remains in critical condition after being transferred to another hospital for treatment, according to a statement from his family.

Monday, a black SUV struck four-year-old Lilliana Peltier, three-year-old Konnor Peltier and two-year-old Kayden Peltier while they were at Bohanon Park. The Minnesota State Patrol said a trooper tried to pull over 27-year-old Kabaar Powell for a traffic violation, but instead, Powell sped off and led troopers on a chase from I-94 onto residential streets and eventually into the park.

Nicolle Peltier, the children's mother, told Fox 9 Konnor and Lillianna have been released from the hospital. Kayden, however, was transferred to another hospital better equipped for his treatment. He had surgery Friday and remains in critical condition. A photo released by the Peltier family's lawyer shows Kayden attached to multiple tubes and wearing a head brace.

According to the charges filed against Powell, Kayden suffered a pelvic fracture, cervical spine fracture, intracranial bleeding and had to have his spleen removed.

The Peltier family also thanked the community for the prayers and support.