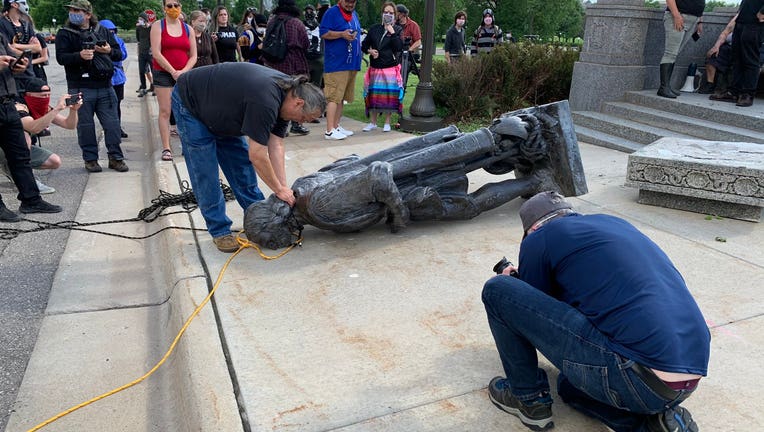 ST. PAUL, Minn. (FOX 9) - No protesters have been charged for tearing down a statue of Christopher Columbus outside the Minnesota State Capitol on June 10, despite the governor pledging "consequences" for those involved.

The Minnesota Bureau of Criminal Apprehension's investigation continues "as the BCA works to identify other participants in the incident, beyond the leader," said Bruce Gordon, a spokesman. Once the investigation is done, the state will turn over its case to the Ramsey County Attorney for possible charges relating to destruction of public property, Gordon said.

Two weeks after the statue was toppled, authorities have no made any arrests after a Columbus statue was pulled down at the state capitol.

Protesters with the American Indian Movement tied two ropes around Columbus's neck and quickly brought the statue down. The incident played out on live TV, and organizer Mike Forcia told FOX 9 he expected to be arrested and would consider it a "badge of honor."

Native Americans said the statue's toppling was a moment of healing because Columbus conquered, enslaved and killed Native people. The 10-foot bronze statue was installed in 1931 after Minnesota's Italian community gave it to the state as a gift.

Meanwhile, the Capitol Area Architectural and Planning Board -- which is in charge of statues around the Capitol -- is scheduled to meet Thursday for the first time since the incident.

In a news release announcing the meeting, the board said it would start developing criteria for removing statues because "currently, there is no formal policy and process."

State law puts the board in charge of deciding which statues stay and what must go. The CAAP board has never gotten a formal request to remove the Columbus statue, executive secretary Paul Mandell said.

But Lt. Gov. Peggy Flanagan -- who is Ojibwe and serves as the CAAP board's chairwoman -- has called for a comprehensive look at artwork in the Capitol, some of which is offensive to Native Americans and historically inaccurate.

"In the lieutenant governor's eyes and others, it does not spell out what standards we use (for removal)," Mandell said.

Several state officials said both before and after the statue's toppling that there was already process for removal.

"If you want to have a statue removed from the Capitol grounds, there is a lawful process for doing that," Minnesota Public Safety Commissioner John Harrington said on the afternoon of June 10, about 90 minutes before protesters pulled down the statue.

Reporters saw one state trooper explaining to protesters that there was a process. The trooper backed away, and protesters tore down the statue with no resistance from the State Patrol despite at least two hours' notice of their intentions.

The lead organizer, Forcia, told FOX 9 that night he was surprised the state didn't do more to prevent the toppling.

Developing a list of standards could take months or a year, Mandell said. The Columbus statue is now in a "secure location," he said.

Thursday's meeting, to be conducted virtually, is scheduled to start at 1 p.m.