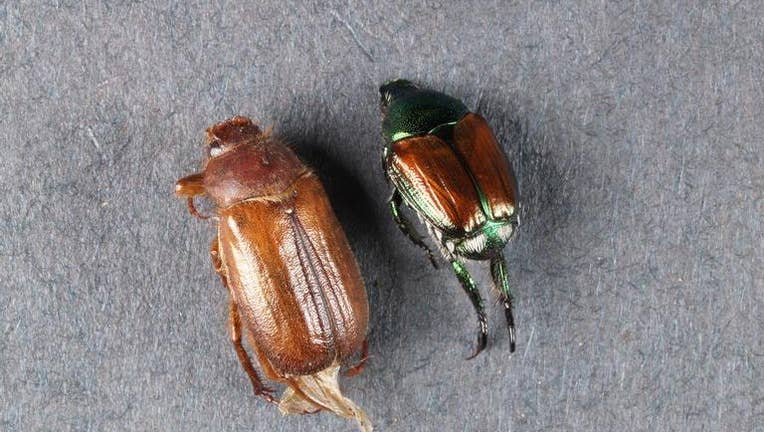 The Minnesota DNR is asking the public to watch out for the European chafer beetle (left), which is shown here in comparison with the better-known Japanese beetle. (Minnesota DNR)

MINNEAPOLIS (FOX 9) - An insect that can cause major damage to turf grass has been discovered in the state of Minnesota for the first time, the DNR warned Monday.

The European chafer beetle, or the Amphimallon majale, was discovered in a south Minneapolis yard recently. The resident reported large swarms of beetles in their yard at dusk and reported them to a University of Minnesota Extension entomologist. The U of M reported the beetles to the Minnesota Department of Agriculture which worked with the USDA to confirm the insect’s identity.

The grub of the European chafer is known to damage turf by feeding on it during the summer months. Home lawns, golf courses and turf growers could be significantly impacted if they become established.

The bugs are about a half-inch long and tannish in color. The DNR says they are similar to June Bugs, but are a little bit smaller and lighter in color. They are most active on warm evenings just before and after sunset. Their grubs can range from a quarter inch to an inch long with a dark brown head and they have noticeable legs.

The MDA is asking homeowners, golf courses and turf growers to report suspected European chafer to the MDA’s Arrest the Pest line at arrest.the.pest@state.mn.us or 1-888-545-6684.

If you think you’ve discovered a European chafer beetle, capture it, take a picture and put it in a container or plastic bag and place it in the freezer. The MDA will contact you if the bug is needed for confirmation.