DALTON, Ga. - President Donald Trump pulled no punches during his rally in Dalton supporting Georgia Republic Senators Kelly Loeffler and David Perdue. Trump told the crowd he will be back in a year in a half to campaign against Governor Brian Kemp and Georgia Secretary of State Brad Raffensperger.

"I'll be here in a year in a half campaigning against your governor," Trump told the cheering crowd. "And your crazy secretary of state."

Both Kemp and Raffensperger have openly supported the president, but have been bound by their constitutional obligations and could not help him overturn President-Elect Joe Biden's victory in the state.

Trump bemoaned how state lawmakers wanted to convene a special session to address the election, but both Kemp and Lt. Gov. Geoff Duncan wrote in a statement released Dec. 5:

"Any attempt by the legislature to retroactively change that process for the Nov. 3rd election would be unconstitutional and immediately enjoined by the courts, resulting in a long legal dispute and no short-term resolution."

Full call between Trump and Georgia’s secretary of state

FOX 5 Atlanta has obtained the full phone call between the Georgia Secretary of State's Office and President Donald Trump along with several key White House staff.

The comments come a day after FOX 5 Atlanta obtained a recording of a divisive phone call between Trump and Raffensperger in which the president could be heard pressuring the state official to "find" enough votes to overturn Joe Biden’s win in Georgia.

"All I want to do is this. I just want to find 11,780 votes, which is one more than we have," Trump was heard saying on the recording. "Because we won the state."

Georgia counted its votes three times before certifying Biden’s win by an 11,779 margin, Raffensperger noted: "President Trump, we’ve had several lawsuits, and we’ve had to respond in court to the lawsuits and the contentions. We don’t agree that you have won."

Campaigning for Georgia's Republican senators ended on Monday as voters are expected to hit the polls Tuesday.

Both Loeffler and Perdue have issued statements on Monday making it known they support fellow Republican lawmakers who will object and challenge the results of November's presidential election during Wednesday's session. While Loeffler can participate in Wednesday’s proceeding because she was appointed by the governor, Perdue’s seat will be empty as the runoff election has not been decided. Both are in a tight runoff race with Democratic challengers Rev. Raphael Warnock and Jon Ossoff respectively that will be decided on Tuesday at the polls.

That was the reason Trump made the trek to Georgia on Monday evening to rally Republican voters for the twin Senate runoffs. Republicans need one more seat for a Senate majority. Democrats need a Georgia sweep to force a 50-50 Senate and position Vice President-elect Kamala Harris as the tiebreaking majority vote.

Gabriel Sterling speaks to members of the press ahead of the Georgia U.S. Senate runoff elections.

The president's claim Georgia's election was stolen from him was also addressed earlier in the day by Raffensperger's elections lieutenant who spent 20 minutes during a press conference running down a list of voting irregularity claims and debunking each as he ticked them off the list. Georgia Election Implementation Manager Gabriel Sterling pulled no punches in naming the president and his supporters as the main reason misinformation is being spread.

"There are people in positions of authority and respect who said their votes don't count and it's not true," Sterling said. "If you believe, in your heart of hearts, that there was [voter fraud], the best thing for you to do is to turn out and make it harder for them to steal."

Meanwhile, Trump at the rally in Dalton on Monday evening said there are several good Republican candidates that could take over for Kemp and Raffensperger. He also said he and his supporters have long memories.

"People will remember the people who support us," Trump said.

Kemp and Raffensperger have not responded to the president's latest remarks.

Polls in Georgia open at 7 a.m. on Tuesday and will remain open through 7 p.m. 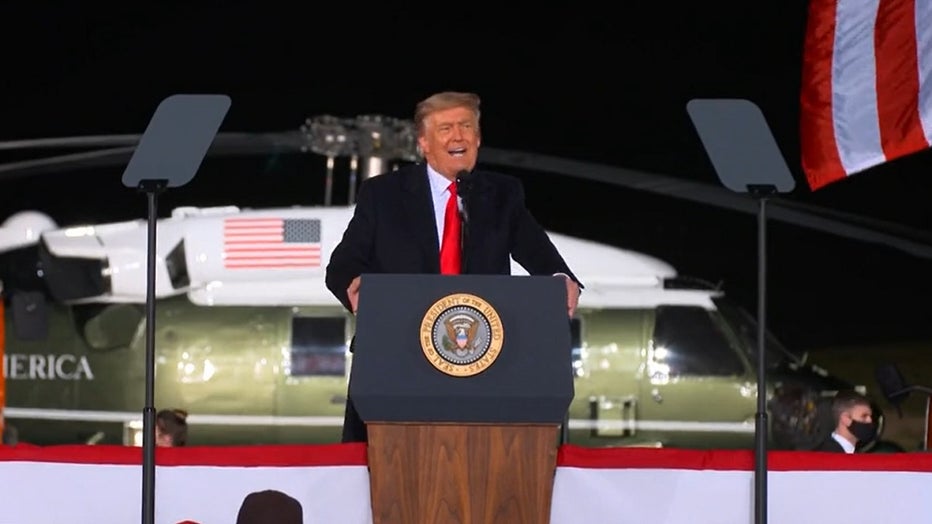 President Donald Trump holds a rally in Dalton a day before voters head to the polls in Georgia's twin Senate runoff races on Jan. 4, 2021. (FOX 5)