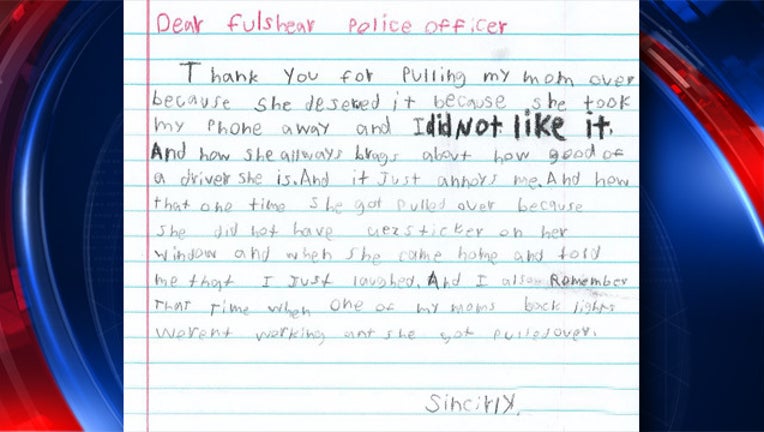 "You have to admire the complete honesty of an Elementary student." (Fushear Police Department)

Police officers in Texas were so tickled by a 10-year-old boy's handwritten thank you letter that they decided to share it on social media.

“We received the letter last Friday from a young man who attends Huggins Elementary School in Fulshear,” Captain Mike McCoy with the Fulshear Police Department told Fox News. “During National Police Week, students from this school write us many letters of support. This one, obviously, stood out.”

The boy's letter to a “Fulshear Police Officer” expressed gratitude for his mother getting stopped. “Thank you for pulling my mom over because she deserved it because she took my phone away and I did not like it and how she always brags about how good of a driver she is,” the student said. “And it just annoys me.”

But that wasn’t the only incident he shared. “One time she got pulled over because she did not have a ezsticker on her window and when she came home and told me that I just laughed,” the boy continued.