A man disguised as a security guard surprised fans at Neyland Stadium in Knoxville, when he enthusiastically participated in a dance team routine on October 29. Video courtesy Beach Galloway via Storyful.

KNOXVILLE, Tenn. - A man disguised as a security guard at a college football game caught fans by surprise when he started blocking the dance team’s performance — only to suddenly do the routine with them and completely wow the crowd.

In the video, a dancer on the team is seen bumping into the man in a blue shirt, later identified as Michael Galyean. This leads to a slight commotion before the disguised security guard bursts into dance, causing those in the crowd to erupt in cheers.

"LEGENDDDDDD!!!!!" one person commented on the video.

"Saw this whole thing - you really tricked me! Loved it!!" another wrote.

"All of us watching in stands were all mad like what is that fool doing and then BAM it was epic and we were all going crazy!!! Bravo," a third person commented on the dance team’s video. 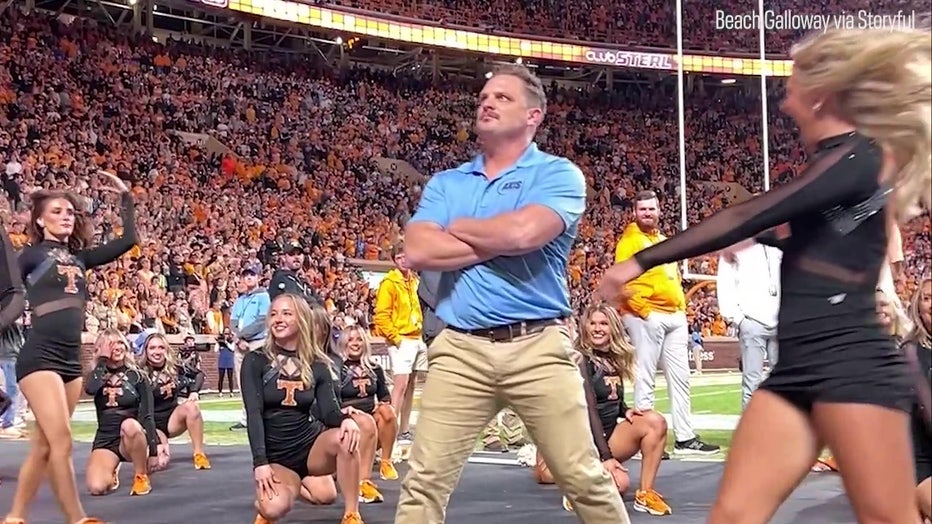 Michael Galyean is pictured in a screengrab from a video performing with the University of Tennessee Dance Team on Oct. 29, 2022, in Knoxville, Tennessee. (Credit: Beach Galloway via Storyful)

Galyean, whom the dance team tagged in the post, isn't actually a security guard at all. But he did technically act as one for a period of time leading up to the performance.

"At halftime, I changed into an Axis Security shirt. I ‘worked’ the whole third quarter as sideline security, patrolling the area in front of the student section and in front of the dance team," Galyean wrote on his Instagram.

The Tennessee Dance Team, a seven-time national champion team, wanted to try something new. And so, members of the team who are friends with Galyean apparently had him in mind for a special role.

"The Spirit Program At UT reached out to me explaining they wanted to do a ‘bit’ during the next game that involved some acting and dance and that I was the first person that came to mind," Galyean wrote.

Galyean said as he made his way toward the dancers and stood right in the middle of their performance, he noticed the confusion.

"I see the shift in the crowd going, 'Why are you in the way?'" he told WBIR-TV. "And then when it flipped, their reaction was just such genuine shock and excitement." 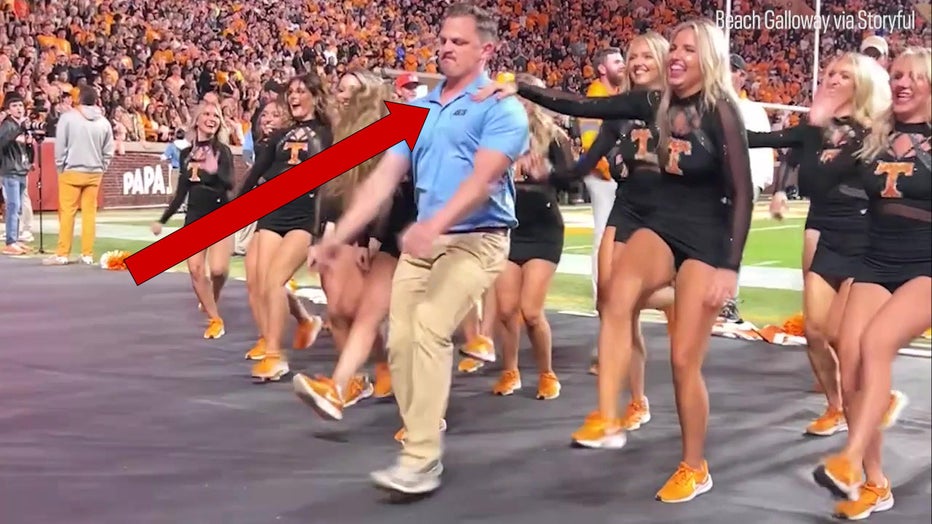 Michael Galyean is pictured in a screengrab from a video performing with the University of Tennessee Dance Team on Oct. 29, 2022, in Knoxville, Tennessee. (Credit: Beach Galloway via Storyful)

Tennessee Dance Team Coach Kelly Tafazzoli told WBIR-TV that she knew Galyean not only looked the part of a security guard but also that "he was a very talented dancer."

Galyean called the performance a "dream come true," noting how he applied to both Tennessee and Kentucky for their cheer programs.

"When visiting UT, I remember rounding the corner of campus, seeing the monumental Neyland Stadium and saying ‘I’m choosing UT because I’m gonna cheer on those sidelines one day,’" Galyean wrote on Instagram. "Well, the insecure and frail freshman me never tried out for the team and I’ve always regretted not fulfilling my childhood dream."

In getting to perform with the dance team in front of 105,000 people, he thanked Tafazzoli and the team "for allowing me to check a box off on my bucket list and for making the 17-year-old in me feel so alive."