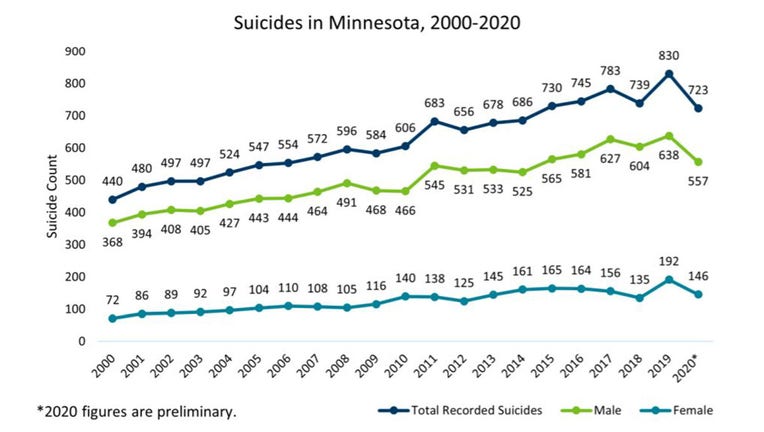 (FOX 9) - After hitting a record high in 2019, the number of deaths by suicide in Minnesota decreased in 2020, according to the latest report from the state health department.

The Minnesota Department of Health released the Minnesota Suicide Mortality preliminary 2020 report Wednesday, which found 723 Minnesota residents died by suicide in 2020, compared to 830 in 2019.

However, the number of suicides in Minnesota, as well as in the United States, has been steadily increasing over the past 20 years. This was the sixth year in a row in which over 700 Minnesotans died by suicide, according to MDH.

The report found men continued to have a greater risk of dying by suicide in Minnesota than women. Men have made up the majority of suicides in Minnesota over the past few years, including 2020 when 77% of the state’s suicide deaths were among men.

Health Commissioner Jan Malcolm celebrated the decrease in suicides in Minnesota, but said there is still more work to be done, particularly as the number of alcohol and drug-related deaths increased in 2020.

"It’s a good sign to see that number drop, but 723 preventable deaths are 723 too many," Malcolm said in a statement. "We are not yet sure what impacts the COVID-19 pandemic had on this trend, but it is clear that we must continue to support people and communities to address the causes of suicide."

Suicide is the eighth leading cause of death in Minnesota, according to MDH.