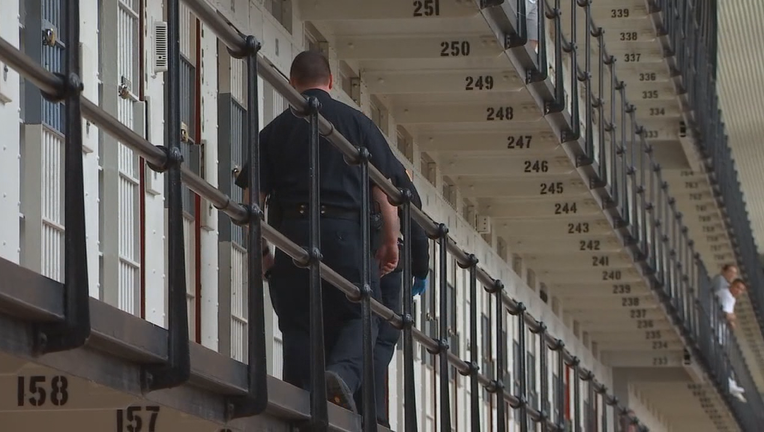 STILLWATER, Minn. (FOX 9) - A former guard at the state prison in Stillwater pleaded guilty Thursday to conspiring with an inmate to smuggle large quantities of methamphetamine within the facility, according to a press release from the office of U.S. Attorney Andrew M. Luger.

Court documents show Faith Rose Gratz, 24, pleaded guilty to her role in a drug distribution scheme in the Minnesota Correctional Facility in Stillwater, which is the largest high-security prison in the state. She had worked with an inmate, Axel Rene Kramer, 34, who is serving a 288-month sentence for second-degree murder.

Court documents show on at least six occasions, Kratz picked up packages of meth from contacts that Kramer provided her. She then would pass Kramer the drugs when she was responsible for guarding him while he was assigned to "office cleaning duty."

Kratz also smuggled Kramer cell phones he used to coordinate the pickups, and warned him whenever guards were about to search his cell — giving him time to hide the drugs and cell phones.

The two were romantically involved. Kramer saved Gratz's number in his phone as "Bbygirl" and they texted about getting married once he was released from his prison.

The court documents indicate there was a third conspirator who has yet to be charged. Kramer obtained his drug sources from another inmate who went by the alias "Chino." Chino had contacts on the outside who could acquire prepacked drugs, primarily meth. Chino would pass those contacts, along with planned pickup times and locations, to Kramer via text, and Kramer would then pass that information on to Gratz.

Over the course of the conspiracy, which investigators believe ran from at least January to April, Kramer and Gratz exchanged hundreds of text messages. They did not delete them or use a messaging app with an "auto-disappear" function, a decision that would eventually prove costly.

A tip leads to an investigation

On April 8, Gratz parked in the employee parking lot of the Stillwater prison with a half-pound of meth in her car. A few days earlier, when she had been off work, Gratz had met up with one Kramer's contacts — the wife of another inmate. The drugs had already been paid for, and the exchange between the two women occurred in the parking lot of a local gas station, according to court documents.

After her arrival, Gratz got out of her car and entered the prison to scope it out and determine if it was safe to bring in the drugs, according to the documents.

It was not safe. Once inside, she was confronted by law enforcement officials.

A few days earlier, authorities had received a tip Kramer was hiding a phone in his cell, court documents show. This time, Kratz was not able to warn him, and guards searched his cell and recovered the phone. Prison officials reviewed the phone, and discovered the history of text messages between Gratz and Kramer.

Kratz reached a plea agreement with the lead prosecutor in the case, Assistant U.S. Attorney Harry M. Jacobs, in which she agreed to plead guilty in exchange for a sentence of 9-11 years with a fine of $30,000 to $300,000.

U.S. District Judge Eric C. Tostrud will ultimately decide Gratz's fate at the sentencing hearing, which has yet to be scheduled.