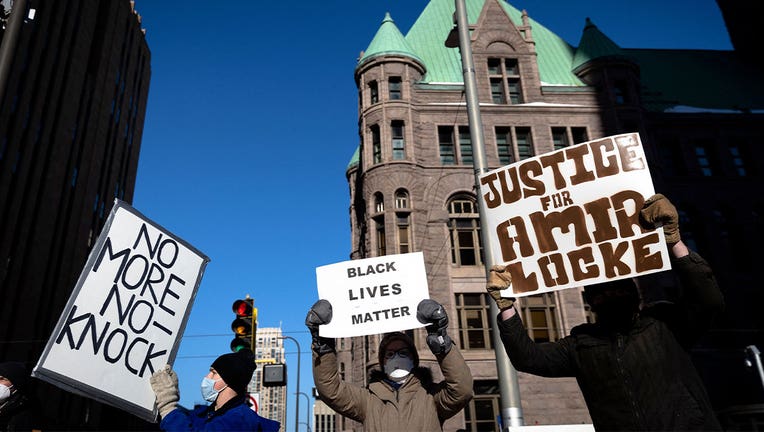 Demonstrators hold "Justice for Amir Locke", "Black Lives Matter" and "No More No-Knock" signs during a rally in protest of the killing of Amir Locke, outside the Hennepin County Government Center in Minneapolis, Minnesota on February 5, 2022. - Auth (Getty Images)

(FOX 9) - The "State of Black Minnesota Report 2021" takes a deep dive into the stark racial disparities in Minnesota in hopes that the community can come together and make things better for everyone. It features not only the struggles of the Black community but the triumphs and the ways the Black community has thrived.

"If we're going to be honest about what it takes to address and to overcome the inequities … we have to begin by acknowledging that they didn't happen in a vacuum or by accident. They happen through intentional structured means, through policies and practices that were intended to be openly specifically racist," said Steven Belton, president and CEO of the Urban League Twin Cities.

A report released on Thursday is shining a light on the challenges and inequalities that Black people in Minnesota face.

"(The report is) coming at an important time when we know that Minnesota has among the worst disparities in homeownership and health, education and employment in the country," Belton said.

The Urban League said significant and encouraging change happened in 2021, but there are still glaring historical inequities:

Dr. Rachel Hardeman, the director for the Center for Antiracism Research for Health Equity at the University of Minnesota School of Public Health, is the expert who provided analysis in the section of the report about health and wellness among Minnesota’s Black community.

"Minnesota consistently ranks as one of the healthiest states in the nation. However, those averages don't tell the whole story for our state," she explained. "Minnesota actually has some of the most significant health inequities in the country, particularly when you look at Black versus White residents."

Hardeman explained that racism causes stress in people’s lives and can even impact birth outcomes for pregnant mothers.

"The chronic stress due to being disadvantaged, due to not having access to all of the things that you need, due to being discriminated against in the workplace or in other places -- that causes wear and tear on the body," Hardeman explained. "That stress eventually wears the body down, and we see this in pregnancy and childbirth."

She explained further that her research shows living in Minneapolis neighborhoods with more police patrols can affect birth outcomes for pregnant mothers.

The Urban League also released a report called the "Minnesota Equity in Action Framework," which lays out a plan to help improve education. The framework consists of five priorities each with a prescription for change: