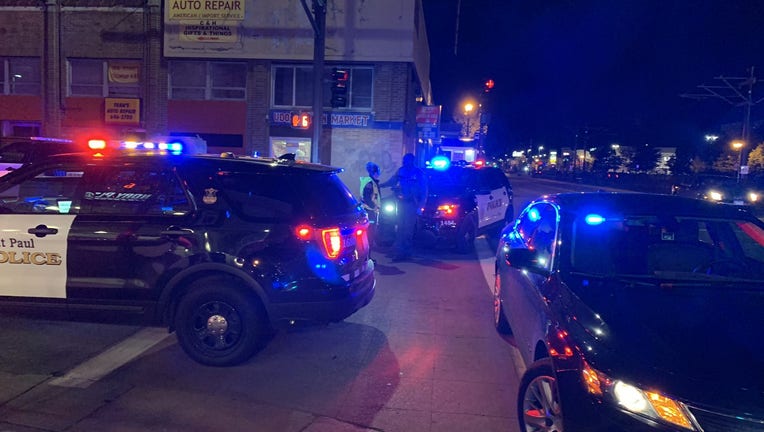 The scene of a Sunday night shooting in the Midway neighborhood of St. Paul. The scene is near Allianz Field where Minnesota United was playing its first-ever playoff game at the time. (FOX 9)

ST. PAUL, Minn. (FOX 9) - St. Paul police responded to the Midway neighborhood Sunday night after reports of a shooting that left two people hurt not far from Allianz Field where the Loons were playing their first-ever home playoff game.

Police were called to Pascal Street and University Avenue around 7:35 p.m. for the shooting.

Just after Minnesota United kicked off at Allianz Field Sunday night, a large police presence responded to a shooting in the Midway neighborhood by the stadium.

After responding, police say they found two people who had suffered gunshots wounds in a parking lot at the intersection. One man had been grazed by a bullet in the head and shot in the arm. The other had been hit in the torso. Police say both victims are expected to survive.

Officers say they have one suspect in custody.

Officers believe the attack was not a random act. Officers say it appears there was a group of people hanging out behind a laundromat Sunday evening when another group passed by and gunfire broke out. One weapon was recovered at the scene.

Sunday's shooting came moments after Minnesota United kicked off at home, taking on the Los Angeles Galaxy at Allianz Field. St. Paul Mayor Melvin Carter, who spoke at the scene following the shooting, said that while the proximity to the game is concerning, the public should be worried anytime there is violence in our community.

"What's wrong with this isn't that it happened at Allianz Field," said Mayor Carter. "It's that it happened in our community at all. Anytime that we see shots fired, it's a tragedy and a travesty."

In all, five people were shot in St. Paul between Friday and Sunday.

According to the St. Paul Police Department, 132 people have been shot in the city so far this year. There have been 24 homicides, of which 22 involved firearms.

Police the investigation is ongoing and officers are reviewing surveillance video.