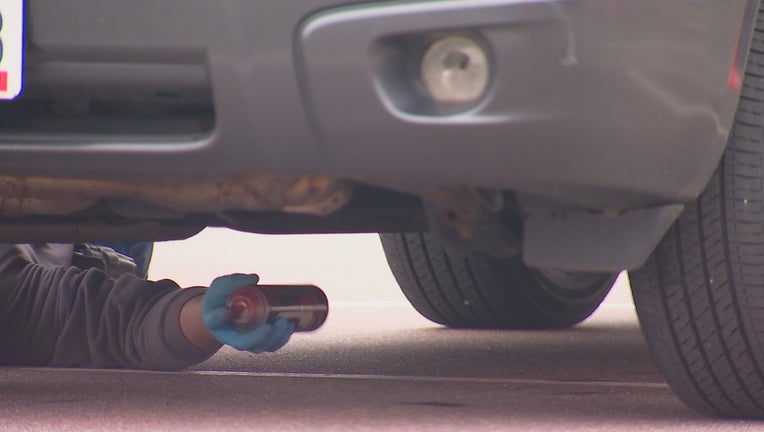 Police held an event Saturday to allow car owners to get their catalytic converters marked -- with hopes it will dissuade theft. (FOX 9)

ST. PAUL, Minn. (FOX 9) - As the theft of catalytic converts from vehicles is becoming a bigger problem in the city, St. Paul police are taking steps to dissuade thieves.

"It was just an ungodly loud and it did not sound healthy," Spencer John said of a noise that is unfortunately becoming all too familiar: the sounds from a car’s engine after a thief has stolen its catalytic converter for the valuable metals inside.

As the theft of catalytic converts from vehicles is becoming a bigger problem in the city, St. Paul police are taking&nbsp;steps to dissuade thieves.

On Saturday morning at Allianz Field, the St. Paul Police Department tried to get ahead of the growing problem, marking catalytic converters with paint and installing anti-tamper screws on license plates.

About 30 officers attended to nearly 1,000 cars in four hours.

In the next two weeks, the department hopes to talk to area scrap yard owners and come to an agreement where salvage yards refuse to buy converters with the paint, removing the incentive for a thief to steal one.

"It’s not a guarantee, but it's something," Hallstrom said.

"If somebody else had a can of gray or whatever color paint they could just spray right over that or they could grind it off," Economy Muffler and Brake Owner Mark Olek countered.

Olek says he is seeing two or three cars with stolen converters each day at his St. Paul auto shop.

"We’ve seen it where they cut it up in front and hook a chain on and pull the whole exhaust off the car," Olek said. "They can run you a lot of money."

The police department says 600 converters have already been reported stolen this year, just in St. Paul.

"If they want your converter, they’re going to get it," Olek said.

However, to improve your chances, if you missed Saturday's event, Hallstrom recommends drivers go to an auto repair shop and buy high-temperature paint. Then, identify your catalytic converter underneath your car and paint it.

You can also buy a shield to cover your catalytic converter and deter thieves, with many auto shops charging around $200 for the service.