Minnesota Senate Republicans are proposing slashing the state's lowest income tax rate nearly in half, but Democrats believe a more targeted approach would be beneficial to those who need relief the most.

(FOX 9) - Minnesota Senate Republicans on Thursday proposed slashing the state's lowest income tax rate nearly in half, which they said would be the biggest tax cut in Minnesota history.

The bottom rate, which all filers pay for a portion of their income, would fall from 5.35 percent to 2.8 percent under the GOP proposal. The lowest rate applies to the first $28,050 of income for single filers and $41,050 for married couples.

"Our lowest income tax rate – our lowest – is outrageously high," said state Sen. Carla Nelson, R-Rochester and the Senate Taxes committee chair. "This bill impacts everybody’s rates, and I think that’s the important piece. Everyone’s income taxes will be lowered through this bill."

Democrats criticized the plan because a broad rate cut would benefit wealthy Minnesotans. The DFL said the Legislature should use tax relief mechanisms that target low- and middle-income people. 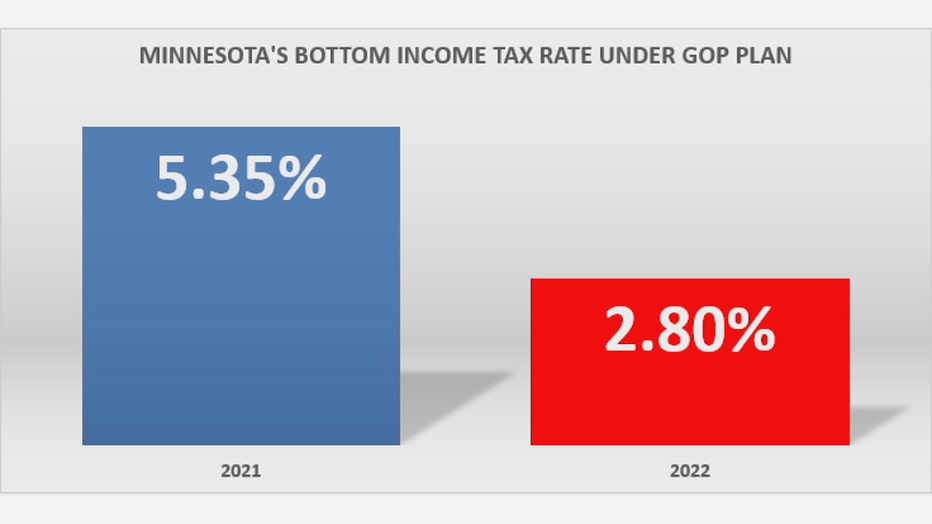 Minnesota Senate Republicans are proposing slashing the state's lowest income tax rate nearly in half, but Democrats believe a more targeted approach would be beneficial to those who need relief the most.

"We don’t have to give money to millionaires like the Republicans did in order to help the ones who really deserve it," said state Sen. Ann Rest, the top Democrat on the Senate Taxes committee.

Republicans said the plan would cost $8.5 billion throughout three years when combined with a separate measure that exempts Social Security benefits from state income tax. GOP senators issued a press release on the tax cut along with a pair of scissors.

GOP lawmakers said the state could afford the tax cut because of the $7.7 billion projected budget surplus. Minnesota budget officials are scheduled to release an updated forecast on Monday.

Democrats said the plan was "reckless" and "overpromises because the budget surplus is subject to economic uncertainty made worse by Russia's invasion of Ukraine."

"We need to make sure that we don’t set ourselves up for a deficit in the future. We’re not going to have a $7.7 billion surplus every year," said Senate DFL Leader Melisa Lopez Franzen of Edina.
Republicans said the proposal would mean a savings of $1,000 a year for a household earning $100,000. At $1,000 a year, the proposal would offer roughly $38 of savings per biweekly paycheck.

Democratic Gov. Tim Walz has proposed an expansion of a tax break for working families and direct payments of $175 for most taxpayers except the wealthiest Minnesotans.

The Senate Republican plan doesn't include direct checks, which the GOP has criticized as a "gimmick."

"The governor’s proposal is so small – the check – it barely scratches the surface of inflation," said Senate Majority Leader Jeremy Miller, R-Winona. "So we’d rather focus on permanent, ongoing tax relief."

Minnesota's lowest income tax rate hasn't changed since 2000. That year marked the second straight year the Legislature cut the rate, which had been 6 percent in 1998.