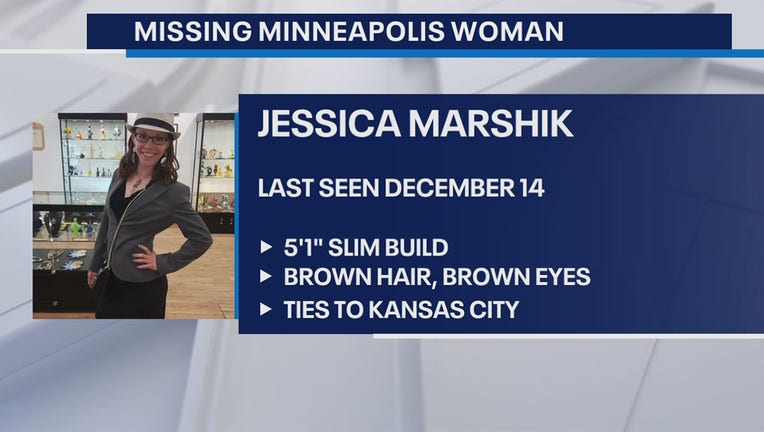 Last seen in mid-December, friends and family of Jessica Marshik are desperate for answers in the search for a 36-year-old Minneapolis.woman.

MINNEAPOLIS, Minn. (FOX 9) - Friends and family are desperate for answers in the search for a 36-year-old woman from Minneapolis.

Last seen in mid-December, friends and family of Jessica Marshik are desperate for answers in the search for the 36-year-old Minneapolis.woman.

Just last week, police put out a missing person’s bulletin asking for help finding her and this weekend, her friends are planning to spread the message further.

Kim Milliard tells FOX 9’s Paul Blume, "Somebody has to have information."

Milliard is so worried about her friend and fellow activist. Apparently, no one has seen or heard from Marshik since December 14.

"If you texted or called her, she’d respond right away. She had her phone out," explained Milliard.

Marshik was a familiar face at some of the larger racial justice protests that have taken to the streets over the last couple years. Jessica, often donning a yellow marshal’s vest to keep demonstrators safe.

She lived alone in the Marcy-Holmes neighborhood along 7th Street S.E. where missing person flyers have been posted for weeks. Investigators have said they need the public’s help.

Beyond the amount of time Jessica has been missing, what has her friends and family so concerned is what they found when they came to Jessica’s apartment last month for a welfare check. Her apartment door was ajar and all of her belongings were inside, but there were no signs of Jessica."

"Her cell phone, her wallet, her laptop, her coat, her boots had been left behind. This is mid-December - it’s cold," Milliard said, adding that Jessica’s mom also found her daughter’s keys inside the apartment. "It feels like somebody went into her apartment and now she’s just disappeared. And how do people just disappear?"

She recently visited Kansas City and is said to have ties to that city in addition to her Minneapolis home.

On Saturday, volunteers are planning to canvas Jessica’s neighborhood, where they intend to post and hand out flyers in a desperate search for answers.

"We just want to find Jessica," said Milliard. "If you know something, please share it. Secrets don’t help her right now. We need to find her. That’s our focus, finding Jessica."

MPD has said that anyone who sees, encounters, or knows the recent or current location of Jessica Marshik is encouraged to call CrimeStoppers at 1-800-222-TIPS (8477). Tips may be submitted electronically at www.CrimeStoppersMN.org.

If located in Minneapolis, you are asked to call 911 or the Minneapolis Emergency Communication Center non-emergency number at 612-348-2345.