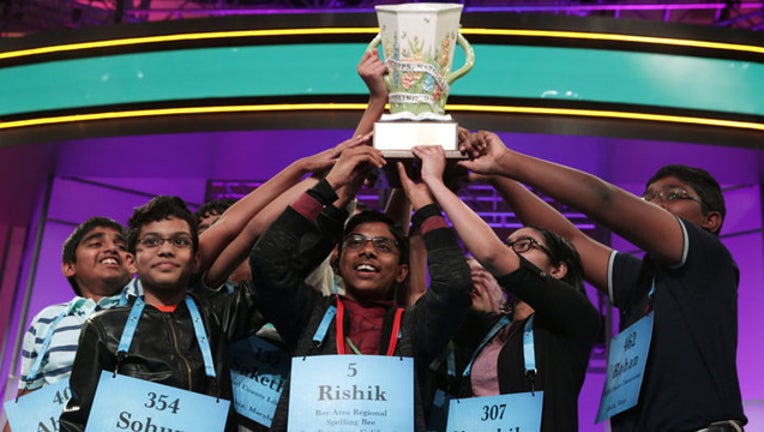 Abhijay Kodali, Sohum Sukhatankar and Rishik Gandhasri hold up the trophy with other co-champions for photographers after 20 rounds of competition and won the championship of the Scripps National Spelling Bee. (Photo by Alex Wong/Getty Images)

In the most extraordinary ending in the 94-year history of the competition, the bee ended in an eight-way tie on Thursday night. The eight co-champions spelled the final 47 words correctly, going through five consecutive perfect rounds.

The Scripps National Spelling Bee is running out of words.

With eight spellers remaining after three hours of spelling in the prime-time finals, pronouncer Jacques Bailly told the remaining spellers that Scripps only had enough words left to challenge them for three more rounds.

Anyone who gets through the remaining three rounds will be declared a co-champion. The bee has never had more than a two-way tie for the title in its history.

Bee executive director Paige Kimble said bee organizers discussed this contingency plan for ending the competition earlier Thursday after it took 5 1/2 hours to narrow the field from 50 spellers to 16.

Sixteen spellers have advanced to the prime-time finals of the Scripps National Spelling Bee after a marathon session that lasted nearly 5 1/2 hours.

The winner will receive more than $50,000 in cash and prizes and a new, custom-designed trophy.

Ten spellers have been eliminated after the opening round of the Scripps National Spelling Bee finals.

There were few major surprises in the round, which included mostly words that spellers were able to piece together through their Greek and Latin roots.

Roughly a dozen spellers will advance to the prime-time finals. The winner receives more than $50,000 in cash and prizes.

The finals of the Scripps National Spelling Bee have begun, with 50 kids on stage competing for more than $50,000 in cash and prizes and a new, custom-designed trophy.

This year's bee had the biggest field ever, with 562 spellers, more than half of whom got in through Scripps' wild-card program. Last year was the first time that wild cards were allowed into the bee, and the eventual champion was a wild card.

Thursday's finalists include nine spellers who finished in at least a tie for 10th last year. The field will be narrowed to about a dozen spellers in the morning and early afternoon before the prime-time finals on ESPN.

The last 14 champions and 19 of the past 23 have been Indian-American.