Road rage incidents are on the rise

Why are people continuing to get so angry behind the wheel?

WASHINGTON D.C. - Road rage incidents are on the rise, according to a study conducted for the National Highway Traffic Safety Administration (NHTSA) — but they’ve been on the rise for the last few decades.

Over the course of a single week this June, a veteran was killed after trying to apologize to another driver whom he cut off, an ex-police officer and gang member were both arrested after a road rage encounter ended in punches thrown and a shot fired, and a teenager was put in a headlock and dragged about a mile and a half at 40 miles per hour after getting into a confrontation with another driver.

RELATED: Veteran accidentally cuts off driver, gets shot and killed when he tries to apologize

Fatalities resulting from crashes linked to aggressive driving increased from 80 instances in 2006 to 467 in 2015 — that’s almost a 500 percent increase in just ten years.

Here’s a look at the major factors that contribute to the increase in road rage incidents as well as some suggestions to keep yourself and your loved ones safe on the road.

“Aggressive driving” refers to dangerous on-the-road behaviors, including following too closely, driving at excessive speed, weaving in traffic and running stop lights or signs, to name a few. NHTSA defines aggressive driving as, “The operation of a motor vehicle in a manner that endangers or is likely to endanger persons or property.”

“Road rage” is the term that refers to the more violent and extremely dangerous on-the-road behaviors, such as exiting a vehicle to confront another driver, physical assault and sometimes even murder. 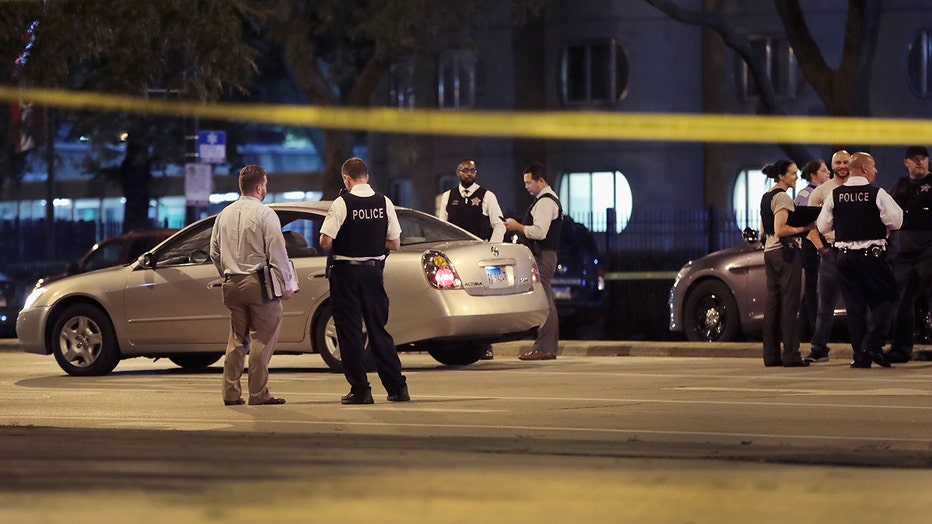 An infant boy and a 13-year-old girl were among the four victims shot in an apparent road rage incident on September 19, 2018 in Chicago, Illinois. Road rage incidents like this have been on the rise recently. (Photo by Scott Olson/Getty Images)

While aggressive driving is considered a traffic violation, road rage is a criminal offense.

Aggressive drivers have been on the road as long as there have been people driving cars, but there wasn’t a ubiquitous term for the phenomenon until the 1990s when the news media began treating “aggressive driving” as a national problem.

When the AAA Foundation for Traffic Safety conducted a study in 1997 that analyzed more than 10,000 reported cases of road rage, it found that occurrences of serious road rage incidents had increased by 51 percent between 1990 and 1996. But it’s important to note that this study was based off of data pulled from news reports, and therefore may not be representative of the actual incidence rate of these type of events — it may just have been that journalists were reporting on the issue more.

So why are people continuing to get so angry behind the wheel?

Depending on who you ask, the answer could be any number of valid theories.

“Sociologists point to the fragmentation of society and the disintegration of shared values and sense of community as the cause of these and other acts of incivility,” says the NHTSA. “Many psychologists blame the intoxicating combination of power and anonymity provided by motor vehicles. Traffic engineers tend to ignore the human component, recognizing that crashes can occur when a vehicle that is traveling at the design speed of a roadway encounters a slower moving vehicle.”

Many experts believe that the ever-increasing pace and responsibilities of modern life have a lot to do with it.

When several police departments in Washington D.C. conducted a special program to target aggressive drivers, officers issued approximately 60,000 citations over a 28-day period in 1997 for offenses like following too closely and passing on the right. “I’m late” was the most frequent excuse that violators provided for their aggressive driving.

“Folks are sacrificing sleep in order to get things done, which only exacerbates the likelihood that somebody will experience a road rage incident," said Jake Nelson, director of traffic and safety advocacy and research for the Automobile Association of America.

A 2016 study from AAA found that sleep deprivation significantly increases a driver’s risk of getting into a crash, even if they only miss 1-2 hours of sleep. Drivers operating on less than four hours of sleep run 11.5 times the crash risk, according to the study.

Add this increased life stress to increased traffic congestion, and you get a perfect recipe for road rage.

Traffic congestion has increased quite a bit in recent decades, which contributes significantly to the problem. The number of miles traveled by American drivers in the 1990s increased by 27 percent, but the amount of roadway only increased by one percent, according to NHTSA. For many drivers, this increased time spent sitting in traffic just to get through day-to-day life can be infuriating.

A study from Colorado State University’s Department of Psychology analyzed the behaviors and characteristics of angry drivers and found that angry drivers reported significantly more risky behavior in their daily driving, higher levels of anger in frequently occurring situations, more frequent close calls and moving violations and greater use of hostile/aggressive and less adaptive/constructive ways of expressing anger.

The best ways to reduce the likelihood of getting into a dangerous road rage situation are to take care of yourself and practice courteous and attentive driving.

Experts suggest getting plenty of sleep, reducing personal stress and making sure you aren’t rushing to get places while driving, which might require measures like laying out outfits for the day ahead the night before.

The anonymity of being in a car makes many people feel emboldened to act in ways they would not when face-to-face with another person — making sure you aren’t one of these people can help reduce the chance of other people becoming aggressive toward you. If you wouldn’t shove your way in front of a stranger waiting in line at the Department of Motor Vehicles because of how unpleasant it would be to face that person afterward, it’s probably not a great idea to cut someone off in bumper-to-bumper traffic.

Experts also suggest avoiding escalation at all costs — if another driver is exhibiting aggressive behaviors, avoid eye contact, don’t roll down you window or get out of the car, try to continue driving at a normal pace and create a safe amount of distance between their car and yours.