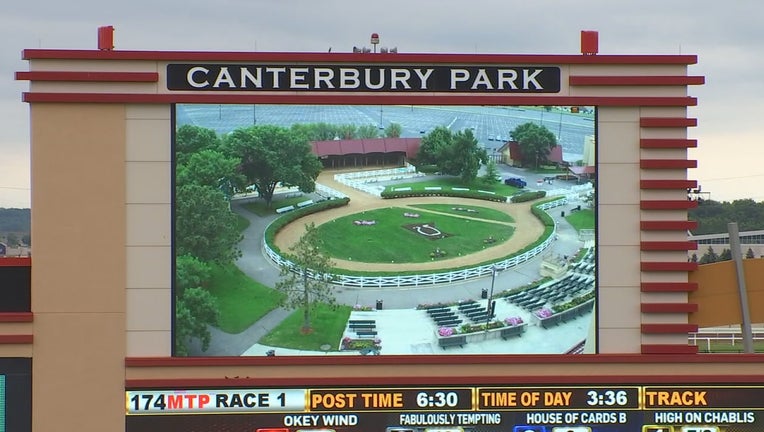 SHAKOPEE, Minn. (FOX 9) - Normally at this time of year, Canterbury Park would be making its final preparations for racing season to begin, but just like almost everywhere else, it's not business as usual in Shakopee.

“I don’t see that racing would take place in May at all,” said Jeff Maday, Canterbury Park media relations manager.

Return to racing at Canterbury Park may not happen until June

Normally at this time of year, Canterbury Park would be making its final preparations for racing season to begin, but just like almost everywhere else, it's not business as usual in Shakopee.

Canterbury Park suspended operations on March 16. To longtime employees, like Maday, Canterbury Park has served as a home away from home and the coronavirus pandemic has hit the business hard.

“We had to furlough 850 employees,” said Maday. “Shakopee is a small community, a tight community, but it relies a lot on revenue generated from racing and from Valleyfair for that matter.”

As of Wednesday, there are currently seven horse tracks in the U.S. that remain operational. The races go on without fans in attendance, but Maday says it doesn't make sense for Canterbury to follow that model.

“With no fans in the stands, we’ve got no admission, no food and beverage, no on-track wagering, which means no revenue,” said Maday. “So you could run for a while, I think, if you knew that down the road, sometime in the summer you could have spectators there and start generating revenue, but again that’s uncertain and those are the things we’re trying to figure out.”

If there is no racing, the track could lose millions.

“For the purse fund, the money generated for operations for purses, it’s about a half a million a month so the company is losing at least that much probably,” he said.

Race fans and Canterbury employees are left to sit and wait, but from the sound of it, the waiting period is far from the home stretch.

“I think realistically you’re looking at June or late June for that matter, if you can seriously consider having crowds on hand and it might not be that early either,” said Maday.