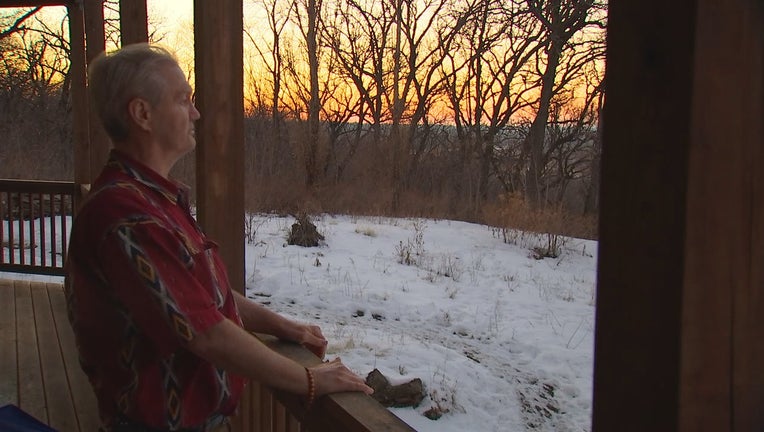 Jonathan Ceplecha is well on the road to recovery after last year's trouble. (FOX 9)

REDWOOD FALLS, Minn. (FOX 9) - A western Minnesota man is back home and continuing his recovery, months after a harrowing situation left him trapped underneath a tree for days.

Fifty-nine-year-old Jonathan Ceplecha is grateful to take in the view from his backyard, the place where his entire ordeal began almost six months ago. "I feel very good, some of the natural optimism that I had in September when I first went to the hospital has come back," he says.

A western Minnesota man is back home and continuing his recovery, months after a harrowing situation left him trapped underneath a tree for days.

Ceplecha lives alone in his Redwood Falls home and was working to clear trees on that August morning when his life changed.

"All I saw in a split second was that big trunk coming right at me," he recalled.

The tree crushed his legs, trapping him with only the clothes on his body. "I knew no one’s going to miss me 'til Sunday, and so I knew Monday would be the earliest I would be rescued, so I knew I’d have from Thursday to Monday, minimum, to make it so I planned for a five to ten-day life out there."

The Army veteran prayed to calm his spirit but knew he had to get creative for water to keep his body alive.

"Water was the key, I knew in approximately 72 hours without water you die," he said.

He used his coat and clothes to collect dew and eventually rain. "I took the jacket and I knew waters not going to go through this very quickly and so I made three pockets like water pockets," he said.

His ex-wife discovered Jonathan Monday afternoon after the family became concerned when he wasn’t answering his phone  "It was 100 hours I was there," he said.

But Jonathan would discover it wasn’t just those first 100 hours that would test him. His recovery has had its own share of difficulties.

"It provides opportunities for one to become humble and then to be able to empathize more with other people going through difficulties," said Ceplecha.

He would face months in hospitals and transitional facilities, enduring infections, therapy, and 14 surgeries including the amputation of his right leg below the knee.

"The entire foot the entire leg was black all the way through. There was no life in it period it was nothing," he added.

Even with the injuries, there have been triumphs too. "I’m using a cane which most people didn't think I’d be doing by this time."

Ceplecha tells us he is a story of survival and choice.

"Regardless of how bad a situation is or what happens to you you still can choose to react to it however you want," said Ceplecha.

But most of all, he says it’s a story of love strong enough to keep him alive for his children. "Bottom line, it’s about the love relationship between a father and his children and his children to their father, it’s a father’s love," he said.